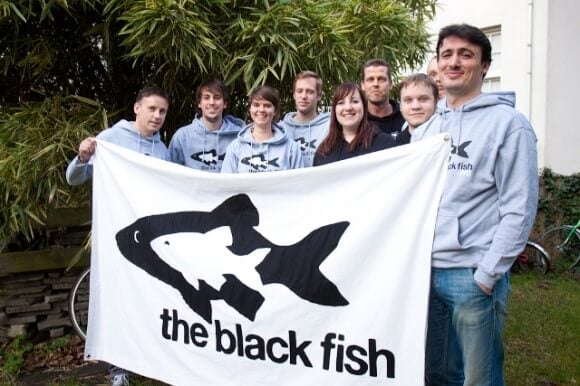 A new face is emerging in the sea activism. Calling themselves the Black Fish, a name based off the fisherman’s slang for illegally caught seafood, the group is intent on making a political impact on the European fishing industry. Boasting government and corporate contacts across Europe, the Amsterdam-based group plans on acquiring a shipping vessel and sailing through the Mediterranean by the end of the year.

Emulating the guerrilla-style, ship-ramming tactics of the Sea Shepherd, who disrupts illegal whaling vessels in the Pacific, the Black Fish are intent on stopping illegal fishing ships. One of their primary fishing species is the endangered blue fin tuna. The sought-after fish is incredibly popular in Japan, with a recently-caught 269 kg catch fetching a record-breaking half a million pounds; such popularity and such prices are more than enough to persuade fisherman to overstock their nets. Caught in both Pacific and Atlantic waters, the blue fin tuna is on the verge of extinction due to continuous overfishing practices in both the Atlantic and the Pacific. You can find out more about overfishing and the plight of the blue fin tuna through the following video:

The group is already gaining notoriety in the fishing industry, even before they officially set sail with their own fishing vessel. The group recently found – and consequently cut open – an illegal Croatian fish farm, setting free millions of pounds of tuna into the Adriatic Sea. The group also boasts setting free several dolphin pens in Taiji, and winning a battle to shut down a German dolphinarium. Black Fish hopes that these acts will send a strong message not only to the illegal fishing companies, but also to the public. Strong overfishing policies, which threaten to throw the ocean’s ecosystem out of order, require equally strong activism to stop it.

The Black Fish group hopes to differentiate themselves from other aqua-activists by gearing their message towards the public. They don’t ‘win’ the fight for the oceans by taking down fishing vessels; they win by raising public awareness and sparking local initiatives. Of course, it certainly doesn’t hurt to have a direct, no-holding-back approach when it comes to activism; young, smart, and uncompromising, Black Fish is just as prepared to get the evidence and lay the charges as Greenpeace and the Sea Shepherd. In time, perhaps they too will be able to command the public stage as their larger activist cousins.

Ramming fishing vessels, cutting fishing nets, and gathering corporate espionage are certainly extreme cases of environmental activism. However, our unsustainable habits are deeply entrenched; even in the face of certain extinction, many ships still overfish their stocks. Perhaps there will be a time when groups such as Black Fish no longer need to go to such extreme lengths to defend our ecosystems. But until that day comes – until our fisheries and our consumptions can learn to coexist sustainably – we must be willing to welcome such activist initiatives with open arms.