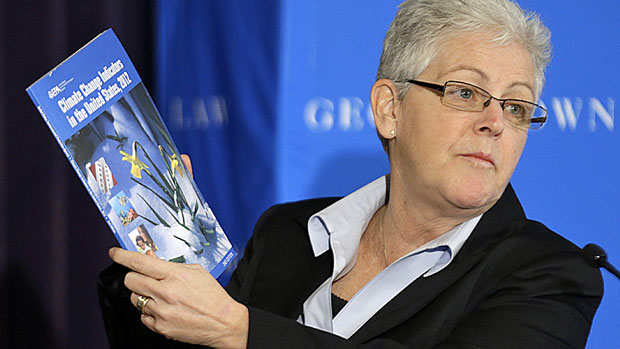 After months of Republican stall tactics, Gina McCarthy has officially succeeded Lisa P. Jackson as head of the Environmental Protection Agency (EPA). This process was months in the making. Although Jackson officially left the agency in February, Gina’s official appointment as chief was withheld for months due to intentional procedural delays. After several political deals were struck with Democrats to let the votes proceed, McCarthy was officially picked in a 59-40 vote.

Both Senate Republicans and President Obama fought over their nominations for the new EPA chief, with the two parties having different visions for what the EPA should do in the future. Republican Senators, such as Senator John Barrasso from Wyoming, wanted to push legislation to handicap the EPA’s ability to regulate greenhouse gas emissions. Republicans, as well as various energy industry groups, believed that tough regulations would stifle the economy, putting utilities out of business and compromising jobs. In comparison, President Obama wanted the EPA to increase greenhouse gas regulations by limiting emissions from new and existing power plants. It seems, with Gina McCarthy’s nomination, that President Obama got his wish for a stronger EPA.

“[The EPA] has a clear responsibility to act now on climate change,” said McCarthy in a video message. “This agency has the courage to act. We can make it happen – but we need all hands on deck. Together we can and we will rise to today’s challenges, working as one EPA.” She has officially stated that the EPA will devote most of its attention on mitigating the disastrous effects of climate change through tougher regulations.

Related:   President Blows His Own Horn

McCarthy’s nomination could certainly be seen as a political one – a way to push President Obama’s pro-climate change agenda through the EPA. However, that is not to say that McCarthy was not a capable candidate for the position. Previously, McCarthy was commissioner of the Connecticut Department of Environmental Protection, as well as several prominent regulatory positions in Massachusetts. McCarthy boasts a history of working with businesses and industry leaders in a constructive and bipartisan manner, making her an ideal candidate in such a divided government.

Overall, McCarthy will be in an extremely important and influential position, especially in the coming months. As chief of the EPA, she will be able to dictate regulations for things like coal plant emissions, automobile mileage standards, and general greenhouse gas emissions. However, if her nomination was any indicator of the US’s divided political climate, it will take more than a united EPA to push progressive, pro-climate legislation through the Republican wall.