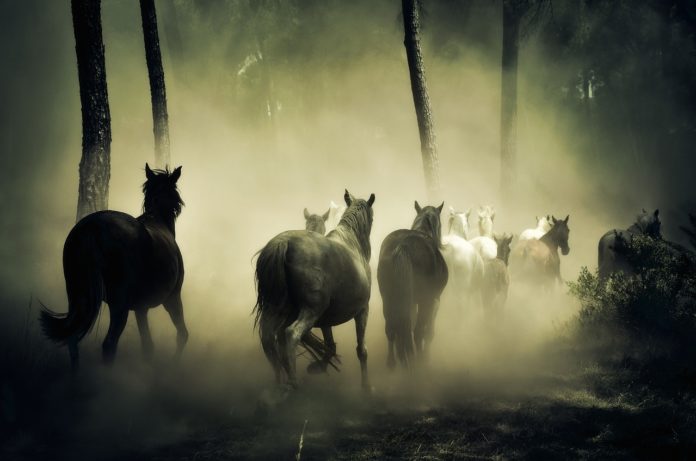 “Give me liberty or give me death.” Patrick Henry (Founding father and slave owner)

In the spirit of having to one-up nature, humans have invented a horror greater than anything the natural world has to offer – prolonged captivity.

Ask any “good” American what values our red, white and blue flag represent and at the top of the list will be freedom.

Why then are two icons of the American West – cowboys and wild mustangs – pitted against one another in a struggle for the quickly deteriorating open federal lands of 10 U.S. states?

Wild mustangs, commonly believed to be descendents of the first horses Spanish explorers brought with them to North America, are one of the last remaining symbols of the world’s love affair with the legends of the Wild West. But like the once great herds of buffalo, mustangs became a casualty of the U.S. government’s Native American extermination policy and were slaughtered in an attempt to provide the natives no easy escape from reservations.

Today, the Bureau of Land Management (BLM) – charged with managing public federal lands, under the Dept. of the Interior, ignores science and humane alternatives by continuing its program of chasing herds of terrorized mustangs with helicopters into corrals where they are sorted and auctioned off, with only a lucky few being selected for re-release.

Most recently, an Arizona congressman, Rep. Raul Grijalva, and quite a few horse advocacy organizations, are going public with their disgust at the BLM’s decision to round up wild horses in northern Nevada at the height of foaling season and the summer heat.

According to the Associated Press (AP), Grijalva wrote “June is the height of foaling season, meaning that BLM will be stampeding tiny foals, heavily pregnant mares and other horses that may already be compromised by lack of adequate water and forage,” in a letter sent to BLM Acting Director Mike Pool.

While the BLM contends that stampeding newborn foals over miles of hot desert is necessary to save them from drought conditions in the area, horse advocacy organizations are skeptical.

“The BLM is using the drought as an excuse to clear out wild horses while risking their death,” Anne Novak of Protect Mustangs told the AP. “They are leaving livestock on the same allegedly drought-afflicted land to graze, so BLM’s actions don’t make any sense.”

Actually, their actions make a lot of sense. Mustangs are just another casualty of the dirty livestock industry most Americans know only by the neat, plastic and Styrofoam packages of chilled cuts of beef stacked in our local supermarkets.

The Government Accountability Office reports that $144 million of our tax dollars goes every year to managing private livestock grazing on public lands. Damn. Even by happily avoiding the purchase of dead flesh I am still supporting the extermination of millions of animals by various government agencies to ensure ranchers line their pockets with blood money.

The absence of predators exacerbates the havoc livestock are wreaking on wild public lands, leading to further desertification of the West and poorer habitat for mustangs and other wildlife. So far, reports clearly show that the BLM has purposefully prevented scientists from including the effects of livestock grazing as part of their regional analyses in trying to figure out why western ecosystems are changing. Read the NY Times report.

But while the landscape changes for the worse, government management of the situation remains largely in favor of livestock interests. More than four million cattle and sheep occupy Western rangelands, offering “conscious” consumers their share of free-range meat, but at a price to animals most Americans cringe at the thought of eating.

Only 27,000 mustangs are allowed on public lands. This means that the BLM rounds up around 10,000 horses a year, offering them to private adopters. Another 23,000 older, unadoptable animals are held in lifelong captivity at taxpayer expense.

Also, many of these mustangs are known to have been sold to slaughter, meaning these once wild animals with freedom still pulsing through their veins are loaded onto trucks, left without food and water for the drive to Mexico or Canada, where they are unloaded, forced into a “kill box” slippery from the blood, urine and feces of the terrified animals that went before it, shot in the head (hopefully) with a bolt meant to immobilize it, lifted by its leg by a chain and gutted while its still-beating heart pumps any memory of freedom into the filth below.

So American consumers choosing free-range beef are unwittingly condemning other animals they would never think of eating to horrific deaths.

And it all starts with these roundups where helicopters drive herds of newborns and elderly horses alike to severe exhaustion and often death.

Being lucky enough to be born human in the First World, we often take our freedom for granted. The horses in this video remind us how precious freedom is, and how devastating it is when it is taken away.

Banning livestock from public lands would leave more resources for mustangs, and until that is a viable option, birth control methods should be employed to control populations. Please visit Save our Wild Horses to take action.