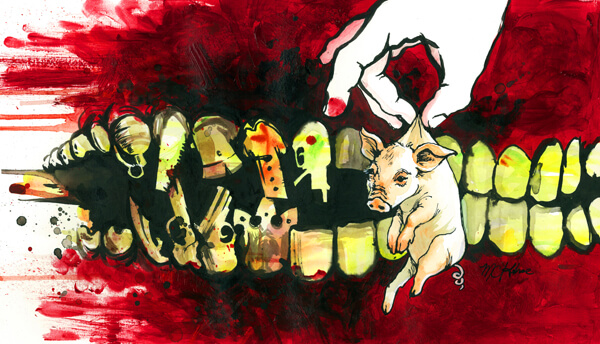 We have enslaved the rest of the animal creation, and have treated our distant cousins in fur and feathers so badly that beyond doubt, if they were able to formulate a religion, they would depict the Devil in human form. William Ralph Inge, The Idea of Progress

Torturing animals for fun, as long as it is captured on camera, is an act protected by the First Amendment of the U.S. Constitution, according to a federal judge in Texas.

Animal crush videos depict extreme torture and violence toward animals as a sexual fetish for viewers and became a federal crime under the Animal Crush Video Prohibition Act of 2010.

After Houston couple Ashley Nicole Richards and Brent Wayne Justice were arrested earlier this year for producing and selling videos of Richards slowly mutilating cats and hacking puppies legs off with a meat cleaver, among numerous other sickening acts of cruelty, U.S. District Judge Sim Lake threw out all federal charges on the grounds that animal snuff films are protected speech.

The Houston Press’ exhaustive coverage of the case, Open Season: Do Laws Against Animal Crushing Videos Violate Free Speech?, describes the screams of a duct-taped bound cat being cut apart and a pit-bull puppy being hacked to death as Richards, dressed in black lingerie and a mask, asks the puppy “are you scared?”

Using the alias Cruel Meshalette on a crush-fetish site where a cast of provocatively dressed girls impaled crawfish, crabs and goldfish in streaming dollar-a-minute videos, Richards and her cameraman, Justice, would tempt their viewers with the prospect of paying for a customized experience on a whole other level of depravity.

Patrons would email specifics of the preferred animal, and the personalized torture script. In one video labeled “Puppy 2,” the Press reports Richards urinated on the gutted body of a dog as she held his severed head in her hand.

Scary enough that these two monsters breathe the same air as my pets, but what should really be sending us to hole up in our homes is that there are enough people who take pleasure out of the intense suffering of innocent creatures to make animal crush videos a profitable business endeavor.

A seasoned investigator with the Animal Beta Project, the association of animal rights activists who first identified Richards and, with PETA, turned the evidence in to police, told the Press that this “case stands out as far and away the worst thing I think we’ll ever see, really.”

So how could an assumed intelligent and stable member of society, a federal judge, use his authority to essentially green light torturing animals for profit?

The answer came at the end of the article in the form of a quote from First Amendment expert and University of Chicago law professor Geoffrey Stone:

Wow. He calls us out as hypocrites and he’s right.

Why is extreme cruelty considered outside the fringes of society’s acceptance simply because people derive pleasure from watching it depicted on video?

Let’s look at this from the animals’ perspective.

Does it matter to the animals when they are debeaked , tail docked, raped on the rape rack , forcibly separated from their mothers, live years in intensive confinement, boiled, skinned and ground up alive, or strung up and sliced open while conscious whether the person doing it actually enjoys causing them pain or is indifferent?

Does the motive behind the cruelty lessen any of their suffering? The obvious answer is no. And the clear conclusion is that being horrified at Richards’ acts of violence and continuing to dine on the tortured flesh of dead animals makes us hypocrites.

I recently came across a 2010 New York Times article, The Animal-Cruelty Syndrome, which takes an in-depth look at the connection between animal abuse and other violent criminal behaviors.

The article details how law enforcement and society as a whole are starting to take seriously how human-on-human violence is often preceded by and associated with animal abuse.

But what prefaces direct animal abuse? Where’s the gateway violence?

The most obvious answer would be passive animal abuse, better known as eating meat.

The gateway violence is not torturing animals – people don’t just start there. The gateway comes from the blessing of society.

It’s perfectly healthy and normal to eat animals that have suffered and been killed for our taste preferences, but people who engage in torturing animals for entertainment preferences are sick and twisted.

“There seems to be little doubt anymore about the notion that a person’s capacity for empathy can be eroded,” Charles Siebert writes in The Animal-Cruelty Syndrome.

And if empathy were a cliff, taking that first bite of dead animal and being told that it’s okay that cow was killed because you really like the taste of hamburgers would be the first rock to fall victim to the inevitable pressures of erosion.