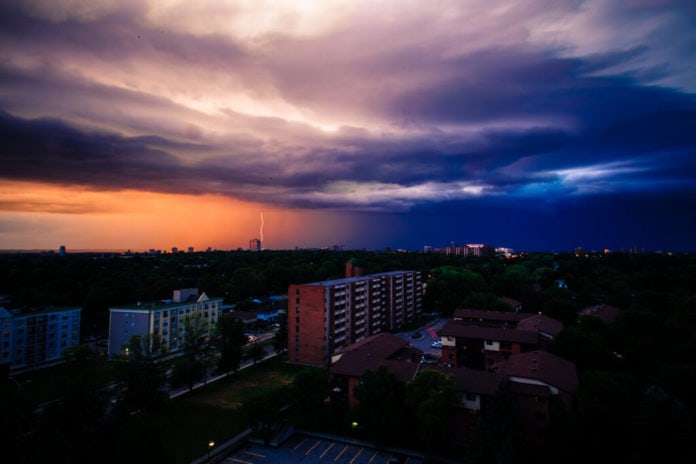 Environment Canada has released its top 10 weather stories of the year. And according to the agency, “go big” seemed to be the theme for Mother Nature in 2012 across North America.

On Environment Canada’s website, the agency describes Super Storm Sandy as one of the most powerful and biggest Atlantic hurricanes in history. But while Sandy was catastrophic for the United States, she was merely a nasty fall storm in Canada; with a $100 million price tag! The hurricane was a blockbuster in what was another active season. Oddly, it was the third consecutive year that 19 tropical storms developed in the Atlantic basin, which is nearly double the norm. Across Canada, big storms and floods dominated the landscape from January to December leading to mega-buck losses for businesses, governments and thousands of Canadians. Insurers were hit hard by the wicked weather in 2012, facing more than $1 billion in payouts in three of the past four years – an unprecedented and worrisome trend for the industry.

Environment Canada believes hot temperatures also dominated the list of major weather stories in 2012. The agency reports that globally, it was another in the top 10 hottest years spanning 160 years of records. In Canada, it was spectacularly warm — the country’s16th year in a row. Nationally, it was the fourth warmest on record and for millions of people in Ontario and Quebec it was the warmest year ever. In addition to higher average temperatures, the year featured a winter that went missing, a March with a record for broken records, and a summer that was the hottest of the hot seasons. Environment Canada says the incredibly intense, huge and long-lasting March mildness excited meteorologists but stressed farmers who worried that early blooms could succumb to killer frosts. At the top of Canada, big heat led to a big melt with Arctic ice cover shrinking to its lowest extent since satellite records began 34 years ago.

With melting comes flooding and 2012 was no exception, according to the agency. In British Columbia, the snowpack was reportedly among the deepest measured in years. Soaking rains and violent thunderstorms escalated the flood risk. It was a slow continuous threat that occurred over two seasons and was fought on several fronts along at least a dozen rivers from one end of the province to the other. At Johnson’s Landing, Environment Canada reports, the excess water mixed with an unstable slope that caused a deadly landslide. Thunder Bay, Ontario lived up to its name when thunderstorms led to a torrential deluge and horrendous flooding. A few days later, elements of the same weather system triggered flash floods in Montreal. With more gully washers in Toronto, Hamilton, Ottawa-Gatineau, Calgary and Edmonton, some insurers referred to it as “the year of flooded basements”.

For more information on the above stories, check out ec.gc.ca