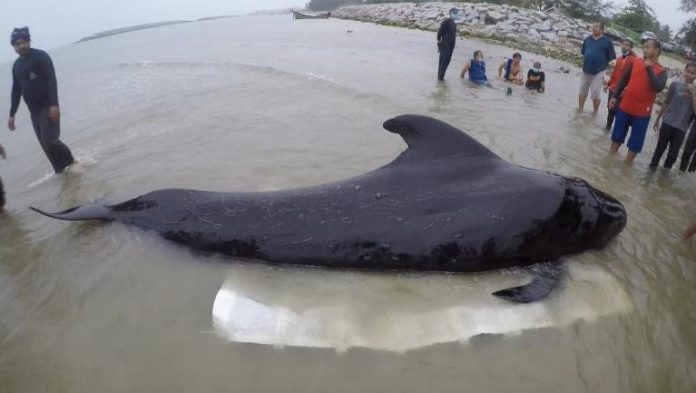 A pilot whale, found in a canal in the province of Songkhla, Southern Thailand, died last Friday with 8 kilograms of plastic stuck in its stomach.

A team of veterinarians and volunteers spent 5 days trying to keep the male pilot alive, as bouys were used to keep it afloat, and umbrellas were provided to give the creature shelter from the sun.

The whale spat out 5 plastic bags on Friday, but later died that afternoon.

Following this, an autopsy revealed a further 80 bags and other plastic items, which were found inside the whale’s stomach. 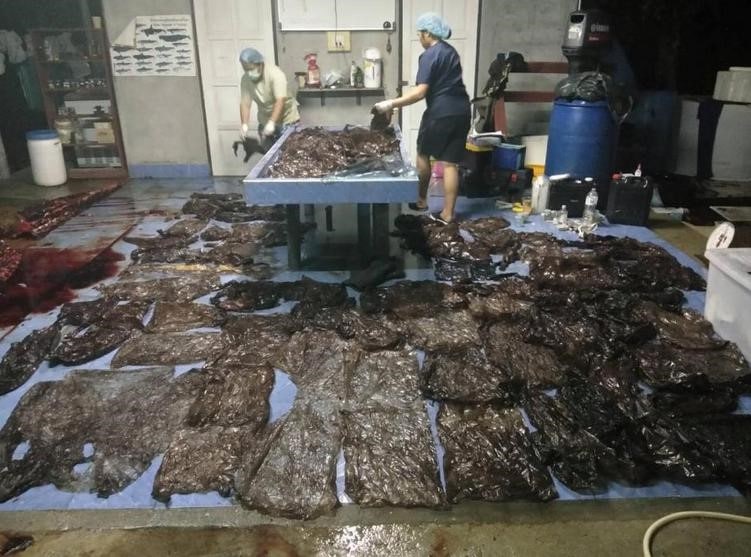 Marine biologist Thon Thamrongnawasawa, summed up the the facts of the situation bluntly.

“If you have 80 plastic bags in your stomach, you die,” he said.

Pilot whales usually eat squid, although occasionally they hunt octopus and small fish if this is in short supply.

According to Thon, at least 300 marine creatures, including sea turtles, dolphins and pilot whales, die each year in coastal Thai regions, due to the ingestion of plastic.

“Its a huge problem. We use a lot of plastic,” he said.

“If you have 80 plastic bags in your stomach, you die”

Coincidentally, the death of this whale occurred one week before World Ocean Day, where the main focus this year will be on the prevention of plastic pollution within the world’s oceans.

Jatuporn said his department would use the whale story as an example of why cleaning up
ocean plastic is so important.

“We will use the whale case and invite all sectors to show their intentions on how to reduce the use of plastic in Thailand,” he said.

According to a report by Ocean Conveyance, Thailand is one of the biggest polluters of plastic, although China is still the largest.

However, the issue of ocean plastic extends well beyond any regional area and is in fact a danger to marine life globally.

By the most conservative of estimates, 8 million tonnes of plastic enters into the oceans each year, although this figure may be as high as 11 million.

Unless drastic actions are taken, it is predicted that the amount of plastic in the world’s oceans will triple by 2025.

This is a threat not just to pilot whales but is a danger to at least 700 other marine species, which are severely effected by plastic pollution on a daily basis, through entanglement, or by mistaking debris for food.

“Unfortunately, this is just the tip of the plastic iceberg – we must go plastic free,” one Twitter user wrote.