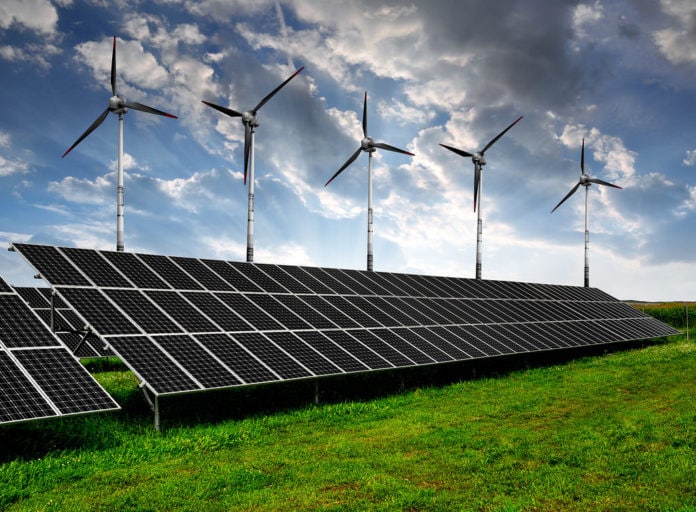 Scientists have created a new water-based battery that can store wind and solar energy which can be plugged back into the national grid.

Stanford researchers believe they can expand the 3-inch prototype to a more industrial-style product that can then be recharged many thousands of times and have a lifespan in excess of 10 years.

“We believe this prototype technology will be able to meet Department of Energy goals for utility-scale electrical storage practicality,” Yi Cui, a professor of materials science at Stanford, said.

“What we’ve done is thrown a special salt into water, dropped in an electrode, and created a reversible chemical reaction that stores electrons in the form of hydrogen gas,” Cui said.

Cui said the manganese-hydrogen battery technology could be one of the missing pieces in the nation’s energy puzzle.

The team that dreamed up the concept and built the prototype was led by Wei Chen, a postdoctoral scholar in Cui’s lab.

The researchers coaxed a reversible electron-exchange between water and manganese sulphate, a cheap, abundant industrial salt.

They added a power source to the prototype to mimic how a wind or solar source might feed power into the battery.

The electrons flowing in reacted with the manganese sulphate dissolved in the water to leave particles of manganese dioxide clinging to the electrodes.

Excess electrons bubbled off as hydrogen gas, thus storing that energy for future use.

Engineers know how to re-create electricity from the energy stored in hydrogen gas so the important next step was to prove the water-based battery can be recharged.

They re-attached their power source to the depleted prototype, this time with the goal of inducing the manganese dioxide particles clinging to the electrode to combine with water, replenishing the manganese sulphate salt.

Once this salt was restored, incoming electrons became surplus, and excess power could bubble off as hydrogen gas, in a process that can be repeated.

According to DOE estimates, about 70 percent of U.S. electricity is generated by coal or natural gas plants, which account for 40 percent of carbon dioxide emissions.

Shifting to wind and solar generation is one way to reduce those emissions.

“The breakthrough we report in Nature Energy has the potential to meet DOE’s grid-scale criteria,” Chen said.

Cui said he has sought to patent the process through the Stanford Office of Technology Licensing.