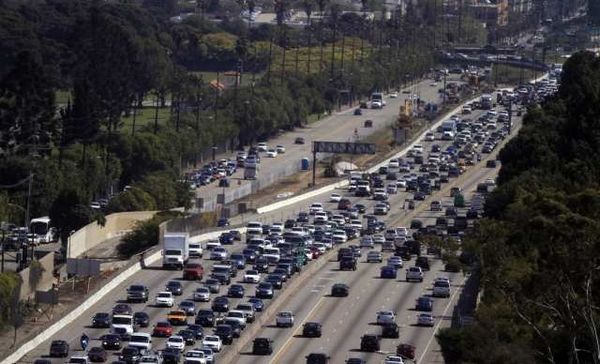 One of the nation’s busiest freeways, Interstate 405, was shut down so that a carpool lane could be built. The 10-mile stretch, located in Los Angeles, is part of a $1 billion project that demolishes a portion of the Mulholland Drive bridge. The freeway was shut down last year from July 15 – 17.

The researchers also found that the decrease in traffic during the Carmageddon weekend of 2011 had an astounding effect on air quality, specifically, air quality “improved 75 percent in parts of West Los Angeles and Santa Monica and an average of 25 percent regionally — from Ventura to Yucaipa, and Long Beach to Santa Clarita.”

Suzanne Paulson, study co-leader and a UCLA professor of atmospheric and oceanic sciences, said in the press release: “The air was amazingly clean that weekend. Our measurements in Santa Monica were almost below what our instruments could detect, and the regional effect was significant. It was a really eye-opening glimpse of what the future could be like if we can move away from combustion engines.”

Sam Atwood, a spokesman for the South Coast Air Quality MAnagement District, told the Los Angeles Times that LA has the worst air quality in the country. What’s the problem with poor air quality? The Times explains that exposure to near-roadway pollutants has been linked and associated with “an increased risk of asthma, heart attack, stroke, premature births and other health problems.” Air pollution is also an added threat to people with asthma, diabetes,  and cardiovascular disease.

The threats don’t just end there. Previous studies, according to Science Daily, have shown that “people who live, work or travel within 165 feet downwind of a major freeway or busy intersection are exposed to potentially hazardous particle concentrations up to 30 times greater than normal background concentrations found at a greater distance.”