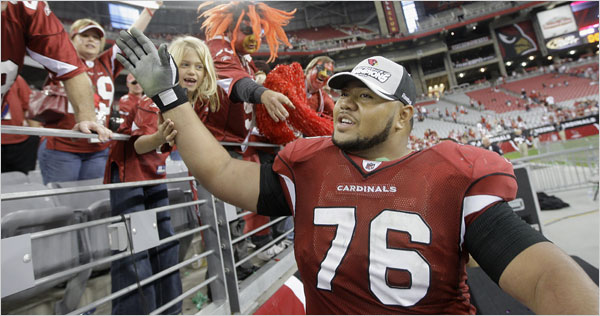 Over the past few months, two big hulking National Football League athletes have “come out” as new vegans. In May, Seattle Seahawks guard Deuce Lutui revealed that a vegan diet, which he adopted in response to his failing a physical while still signed with the Cincinatti Bengals, was behind his 60-pound weight loss. More recently, the Texans’ running back Arian Foster made the switch as well.

In response to the ensuing controversy – many speculated that Foster would “go soft” if he eliminated animal products from his diet – Foster laughed. “People feel so strong about meat and milk,” said the confident 26-year-old athlete. “I wish they felt this strong about peace.”One of the first questions that rises to people’s lips when they hear about elite athletes turning to veganism to improve health and performance is “But where will they get their protein?” The presumption is that a plant-based vegan diet could never supply enough protein to fuel such rigorous activity as these sports stars undertake on a daily basis.

Of course there is no evidence to back this presumption. Nine-time Olympic gold medal winner Carl Lewis had his greatest athletic successes while eating a vegan diet. And UFC fighter Mac Danzig has been beating people up on a vegan diet since 2004. “Let me just say that although protein intake is important, especially for athletes,” Danzig wrote in a public statement about his diet,

“I find the usual listed ‘requirements’ for protein are blown completely out of proportion, and the thought of consuming ‘1.5 grams of protein per pound of body weight’ during down time seems ridiculous to me… I truly feel that all the articles telling people to eat that way are written by people who copied the diets of fanatical body-builders and tried to present them to the general public.”

In general, athletes eating a well-rounded, calorie-sufficient plant-based vegan diet will automatically get enough protein to fuel their physical activity. Good sources of this protein include greens (Yes, vegetables do contain protein. In fact, 30 percent of the calories in spinach come from pure plant protein.), beans, nuts, and seeds.

“But aren’t plant proteins incomplete?” many people then ask. This stems from the popular notion that people have to painstakingly pair different sources of plant protein in order to form proteins that have all the essential amino acids. Rice must be paired with beans, for example, or so goes the common wisdom.

This idea is also faulty, if not entirely false. There is no need to think about or plan your pairings of one incomplete protein source with another in order to generate a complete protein. The body will link complementary amino acids together to form these complete proteins, whether you ate brown rice, spinach, and beans together at lunchtime, or ate brown rice last night for dinner and garbanzos with lunch the following day and spinach with dinner that evening… your body is incredibly resourceful in synthesizing the nutrients it needs from the building blocks you supply it with.

If you’re interested in going vegan but you’re still not assured that whole plant foods will provide you with enough protein to sustain your muscle mass, there are ways to supplement. Plenty of vegan protein powders have emerged on the market over the last few years, and there are now some really excellent choices. Pea, hemp, brown rice, and soy are just a few of the options. Two products in particular stand out as superior because they are composed of raw foods, meaning that none of the vital enzymes are destroyed in the food preparation process.

Sunwarrior raw vegan protein combines the endosperm and bran from sprouted whole grain brown rice to produce an 80 percent protein supplement, containing all of the essential and many non-essential amino acids. Its absorbability is nearly comparable to that of human breast milk. It’s favored by vegan body builders and other vegans who want to increase muscle mass.

Between whole plant foods and well-designed vegan protein powders, vegan athletes need never be worried about a protein deficit. And a plant-rich vegan diet ensures that the athlete is not only getting the macronutrients (carbs, protein, and fat) that he needs, but the micronutrients he needs to prevent disease and enjoy healthy longevity as well.