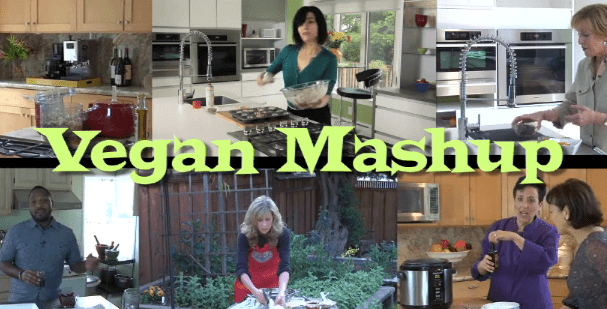 Since becoming vegetarian, I enjoy cooking shows like I imagine men enjoy watching strippers – we can look but we can’t touch.

Unlike many vegetarians I know, giving up meat was a huge sacrifice – I loved the taste, the texture, the smell, the sauces – I guess it was the dead part that got to me. It was only on my 10-year journey from vegetarian to vegan that I learned how kicking the invisible meat addiction addressed not only animal but also human and environmental suffering as well.

So even though biting into a chunk of muscle meat sounds pretty gross to me at this point, I do enjoy indulging in watching others devour a tasty morsel of heart disease every now and then.

Today on PBS I watched one of a series of very plump women explain to a very skinny man how to make her fat shank. For a full half hour she went on about this fat shank – I definitely wasn’t going to get any vegetarian ideas from this one. What could substitute for a good, old-fashioned layer of pig fat?

As America’s obesity health crisis grows, I wonder how this woman can stand up before the camera and talk about how wonderful it all is in the Land of Oz. Because she certainly isn’t living in this world where the human population is 17 million tons overweight. It’s like the 400 lb. man pulling into the drive-thru at McDonald’s, or the woman with the hole in her throat waiting patiently for the check-out lady to unlock the cigarette case and retrieve her menthols.

But just as my plump cook didn’t make the connection between her delicious fat shank and the health crisis pumping through this country’s veins, I imagine our McDonald’s aficionado also does not stop to put the Big Mac and the extra seat on the plane together either.

And they are not entirely to blame. I’m not going to say the girl who ate too many McNuggets should get to sue the creepy clown, but as a society we’re doing an exceptionally poor job of exposing children to the kind of lifestyle we know is healthy.

We’ve stopped marketing cigarettes to kids (Remember those stale gum cigarettes? I loved those… and went on to smoke the real ones for 10 years. Go figure.) because we know the havoc they wreak on every cell of our bodies. But obesity – the kind someone might develop from eating fat shanks – has been called the “new smoking” by Dr. Anne McTiernan, director of the Prevention Center at the Fred Hutchinson Cancer Research Center in Seattle in an LA Times article.

I highly doubt PBS would air shows touting the smooth flavor of homemade cigarettes, so it seems pedaling fat shanks should elicit the same disapproval from PBS executives as well as viewers. Aside from a few vegetarian food programs, PBS’ list of cooking shows would send any hoofed, feathered or otherwise non-human creature running with their shanks between their legs. But as usual, PBS is proving to lead the pack when it comes to quality, responsible programming.

A new cooking show, Vegan Mashup, will be airing this fall on any PBS station that chooses to pick it up. The season’s first six episodes, produced by Delicious TV, which also produces the vegetarian PBS cooking show, Totally Vegetarian, will feature three to four recipes per episode, and will include topics like breakfast, teen-friendly, appetizers and cheap-eats.

As much as I enjoy being reminded of the salty crispiness of fried carnitas, I am looking forward to this show paving the way for the media’s embrace of meat-free living. With food shows being dominated by the likes of Anthony Bourdain, who interestingly enough equates the violence of Hezbollah with opting out of animal cruelty and environmental destruction and has called vegans the “enemy of everything good and decent in the human spirit,” Vegan Mashup will test the status quo.

People always love to tell me Hitler was a vegetarian. I wonder if Vegan Mashup has had to turn away millions in donations from Hezbollah.

Note: You can email your local PBS station to let them know you’d like them to air Vegan Mashup. Go to PBS.org to find your local channel.