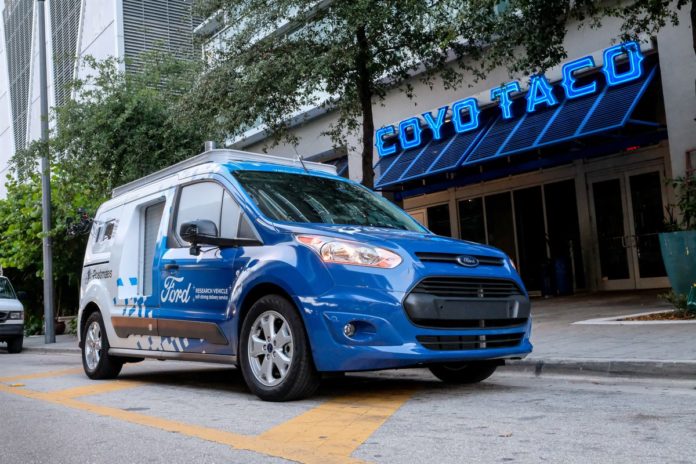 For the past few months, Miami has been a testing ground for Ford’s autonomous vehicles. The test isn’t over yet; Ford is now running a food delivery test using their self-driving vans in the same state.

Ford has many times insisted on their determination to deliver fully-autonomous vehicles by 2021, and they’re working really smart to make sure they live up to their word.

Earlier this year, Ford signed up to a partnership with a delivery startup Postmates, based in San Francisco to test the capacity of their vans.

The main aim of the test is to evaluate the reactions of customers when an autonomous vehicle delivers their order.

Currently, these cars are not self-driving, they have a human driver. Ford’s aim of this test program is to see the customers’ interaction with the vehicles.

They’re designed to look like autonomous, but have sensors.

Ford is running a similar test with Dominos. If this program becomes a success, foods and coffee orders will soon be delivered by a driverless vehicle.

And the American delivery drivers will shift from being the most overworked and the most underpaid employees to being jobless.

Even though Ford is still a little bit behind their major rivals, the General Motors (GM), the company is quite ambitious and plans to add a fleet of self-driving taxis on their autonomous vehicles in future.

In a statement in a blog post, Ford said that their ultimate goal is to evaluate how suppliers and consumers interact with an autonomous vehicle.

The company noted that their main focus is on the first mile and the last mile of the delivery.

According to Ford, the company is developing self-driving technology from various test vehicles. Self-driving cars could bring about a global transformation, in the way we live, and interact.

A Boston Consulting Group says that the autonomous market could touch 77 billion dollars by 2025. This is making all automakers to have the desire to grab a hold on the market.

Ford could be the smartest of all, coming up with a self-driving car that can make food deliveries is such a smart move.