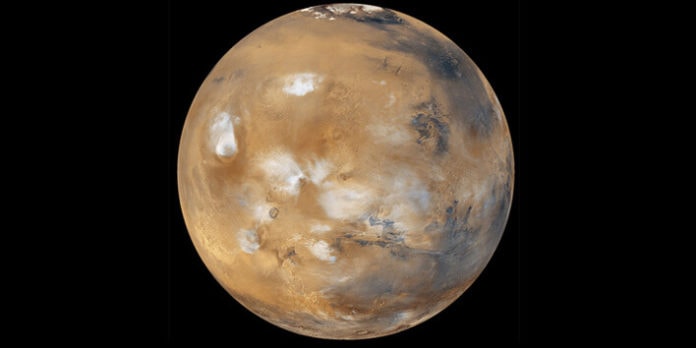 A recent poll found that 71% of Americans surveyed are confident that the U.S. will land a human on Mars within two decades. This recent wave of enthusiasm follows last year’s landing of the unmanned Rover on Mars. Upon finding out that NASA gets just 0.5% of the federal budget, 75% of respondents agreed that NASA’s budget should be doubled to fund a human-led Mars mission.

0.5% sounds like a sliver, but given the supersized U.S. federal cake that weighs in at a massive $3+ trillion a year that sliver ($17.7 billion) is sizeable enough to feed nations, and, if doubled, the entire world. (The UN estimated that world hunger could be eradicated for a cost of only $30 billion a year. To put it in perspective, feeding one person in a developing nation in Africa costs about 10 cents a day. The cost per launch for a space shuttle was $1.5 billion. And of the 135 shuttle flights, none went nearly as far as Mars.)

NASA does more than just explore space. It develops new technology and provides useful data about the Earth. And it should keep on doing that, but given the dire circumstances planet Earth is in, space exploration needs to be re-evaluated before the world enters into another space race—one with far greater ambitions, and far greater costs (both economic and environmental), than landing a man on the moon.

What Are The Chances Of Growing Anything On Mars?

No one would have believed in the early years of the 21st century that the envious eyes of earthlings would be turned toward our nearest neighbour. Until recently, nobody imagined the possibility that man could live on other planets. Colonisation was a fanciful thing for science fiction writers to discuss and for Kim Stanley Robinson to painstakingly explain how we might colonise our nearest neighbours. Yet across the gulf of space, those with minds immeasurably superior to the average man are studying this science fiction as a very real possibility; playing with the idea that humankind might one day visit and then live on another planet and support life on worlds with no soils and no liquid water. They looked at existing and developing technologies and saw that they were good and slowly and surely, they drew their plans for colonisation.

NASA is currently in the stages of planning the first Martian colony for the 2020s and if it goes ahead, all eyes will turn to the men and women who will makeup the crew. We will all eagerly await the first human born off planet.

Begging to Differ on the ‘Red and Green’ Colour Clash

Mars is a red planet and it is red because of the iron oxide – rust. It is an iron rich planet of bedrock but it has no natural soils. Therefore nothing lives there; no plants, no viruses or bacteria, at least as far as we know despite HG Wells insisting that there is a sentient and war-loving race in cities beneath its surface. It is a sterile planet with no soil which means that no Earth vegetation can grow there. Though we know it has water in the form of ice caps at its poles, the freezing temperatures means that it has not been in liquid form for a very long time.

That’s not to say that it would be impossible for life to survive there. Scientists have speculated on the possibility of terraforming the atmosphere for something more comfortable for human life. This is a process that would take a very long time. Immediate needs for the first colonists would be food and they couldn’t take enough on one spaceship to last a lifetime; nor could they expect regular supplies sent from Earth. They would have to grow their own. But how could they do this?

How Does Marvin’s Garden Grow?

Because there are no nutrient-rich soils to grow plants, any colonisers travelling to Mars will need to prioritise growing plants for food and other uses. When we do this without soil it is called hydroponics. As futuristic as this technology might sound, is not the stuff of science fiction; it is very real and affordable for the average household and has been used for several hundred years in various forms. But of course, the sort of equipment that a Martian colony might use would be far more sophisticated than the equipment you might buy for yourself or what they would have been using back then! Some systems are very simple, small plant pots with the plant inside systematically feed a solution to encourage them to grow and this they do quite easily without the necessity of soil. Other more complex systems are growing tents and these might be the sort of devices used by Martian colonists to protect them from the harsh elements of the planet’s weather systems.

You don’t have to live in a nutrient deficient area to have a hydroponic garden. Many purchase them as fashionable additions to their home; like an allotment without the expense or the space that they take up. You can have one in your garden or keep it in a conservatory. What’s more, your plants will be protected from frost and slugs.