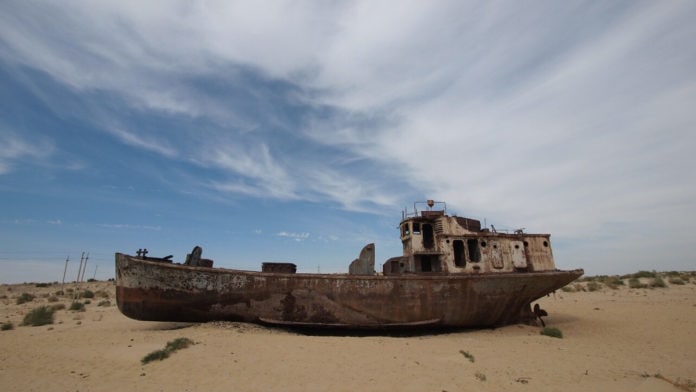 Once, the Aral Sea, located between Kazakhstan and Uzbekistan, was the fourth largest inland body of water in the world, with a surface area of 68,000 km2. Salinity at the time was measured at 10g/L (grams of salt per litre of water). In comparison, the oceans are about 35 g/L, and the Dead Sea about 300 g/L. The Aral Sea has no outflow, and is fed by the Amu Darya and Syr Darya (Darya=river). It’s this lack of outflow that explains the high salinity.

By 1998, the Aral Sea had shrunk to just over 28,000 km2 making it only the eighth largest lake in the world, and the salinity had increased to 45 g/L. By 2007, though, the lake had diminished to only 17,160 km2, and is now divided into two separate basins: The North Aral Sea and the South Aral Sea. It no longer even makes the top ten list of the world’s largest lakes. The South Aral Sea is divided further into two separate basins, east and west. Salinity in the southern basins is up to over 100 g/L, and has resulted in the death of most of the native flora and fauna of the lake.

A fishing industry that once supplied almost a quarter of the fish in Russian markets, and employed 40,000 people, was destroyed along with the lake and its life.

Even the climate in the region has changed, with the loss of so much water, becoming more arid, with significantly decreased precipitation.

The Aral Sea has seen the surface area decline by 90%, and had its volume decrease by 85%, an amount equal to Lake Erie and Lake Ontario combined. The sea level has dropped by over 30 m in many places, leaving fishing boats stranded 100 kilometers from any shore. What was once the bottom of the lake has become a new desert, abandoned fishing boats listing in the sand, scoured by toxic dust storms. Ramshackle towns perch on vanished shorelines, while the population languishes in poverty and high rates of cancer, tuberculosis, digestive disorders and anemia. It’s like a scene from a post-apocalyptic movie, yet it is all too depressingly real.

So what happened to the Aral Sea?

From the early years of the Soviet Union, the region around the Aral Sea was viewed as being ideal for the production of cotton. All it needed was water. So irrigation canals were run in from the two rivers that fed the Aral Sea. The results weren’t unexpected, as the poorly-built irrigation canals were pulling between 20 and 60 cubic kilometers of water out of the rivers per year. The Aral simply could not handle the loss of so much water, and the sea level started to drop.

As cotton production increased, more water had to be diverted, but at the same time, more herbicides and pesticides had to be used. These chemicals ended up in what little water actually made it to what was once the Aral Sea, only to dry out on the sere landscape of the former lakebed. Contaminated dust and topsoil from the crops would also blow into the basin and accumulate.

In recent years, Kazakhstan, the wealthier of the two nations that border the Aral Sea, has tried to maintain at least some of the former lake by repairing irrigation canals to improve water flow. More importantly, they built a dam to separate the North Aral Sea from the South. Since the dam was complete in 2005, water levels in the North Aral have risen by 8 meters, fish stocks are starting to come back, and the lake’s salinity has decreased. There are even signs that the local microclimate is improving, with increased precipitation.

Related:   A Glimpse into the Future: Desert Cities

In the south, Uzbekistan seems to show little desire to rehabilitate the South Aral Sea. Cotton is the nation’s primary cash crop, and the people of this region are extremely poor to begin with. They don’t have the resources to upgrade the irrigation like Kazakhstan did, and they need the cotton crops. So they will continue to drain the river that should be feeding the lake. Rather than trying to rehabilitate the lake, they are instead discussing opening the desiccated lake bed to oil exploration.

The Aral Sea disaster was caused by human mismanagement of a natural resource. In the beginning, the Soviet Union simply did not care, and the Aral Sea was one of many Soviet projects with the stated goal of taming nature. The nations that inherited this calamity are desperately poor, and need the cash provided by the near-destruction of the lake. It is difficult for us in the comfortable west to blame them. They do not have the resources or alternative economic opportunities that would allow them to make changes, especially Uzbekistan. If we want to effect change, then we must help with diversifying their economy. It will largely be up to the industrialized nations of the world to lift the developing nations past the roadblocks that our centuries of waste and consumption have thrown up in the path, if we are going to get the whole world past the mess that humanity has created.

A Glimpse into the Future: Desert Cities