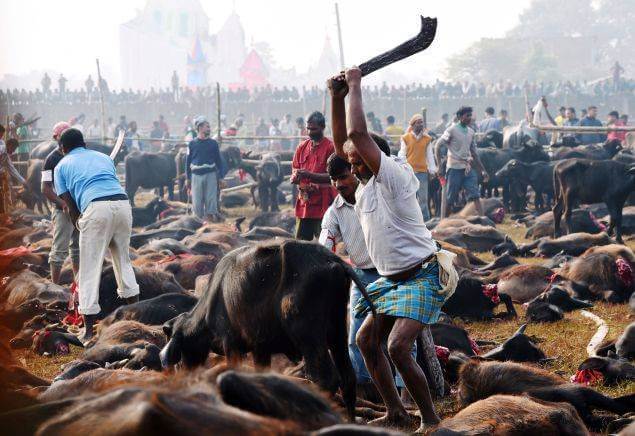 Despite online petitions and pleas from international celebrities, the ritual killing of 200,000 animals in what is deemed the most massive ceremonial animal slaughter to take place in one location kicked off in Nepal without a hitch the day after Thanksgiving.

Heartbreaking. Photos of sick baby buffalo lying atop mounds of headless kindred, waiting for slaughter. Animals hanging their heads, eyes overflowing with knowing, necks tied to trees, the moment before the machetes make contact with their necks frozen by the click of the camera.

These sacrifices are part of the Gadhimai festival held in southern Nepal every five years in order to persuade the Hindu goddess of power to grant devotees good luck.

Animal protection groups present in India, Humane Society International/India, People for Animals and Animal Welfare Network, among others, worked tirelessly in an attempt to stop the ritual mass slaughter, and did succeed in significantly lowering the number of buffalo hacked to death.

Working with the Indian government, these groups convinced India’s Supreme Court to ban the export of cattle from the country into Nepal before the festival, resulting in the number of buffalo killed dropping to about 5,000, half the number slaughtered during the last festival five years ago.

Along with the cattle, untold thousands of goats, chickens, pigeons and pigs were offered up during the two-day ceremony as a sacrifice in the belief that the blood bath will ensure them good luck in the future.

Normally the meat from the victims is sold by the temple, which already collected money from worshipers to have their animals killed there, to a meat contractor. The temple then profits twice from the death of the animals.

Related:
Lax Regulations Mean Your Cage-Free Eggs May Not Be So Animal-Friendly Afterall

But this year, cattle carcasses were so few that the meat contractor cancelled the contract, leaving the dead out to rot, according the Times of India.

Although the Gadhimai festival is significant for the amount of animals killed in one place over the course of two days, it is not the only mass ritual slaughter non-humans must endure.

During the two days of Eid al-Adha, affluent Muslims sacrifice their best domestic animals to celebrate Abraham’s willingness to sacrifice his only son to God, resulting in the death of about 100 million animals worldwide.

The West is quick to condemn these practices as cruel, unnecessary and primitive. Cruel because it’s unnecessary killing, and primitive because we’re about as sure that bathing in the blood of thousands of murder victims will not bring good luck as we are that rhino horn won’t bring back your mojo.

What shocks and offends us is the spectacle, entire fields littered with the headless bodies of sacrificial victims, wide-eyed children watching as men drink blood straight from the still-warm carcasses, millions of worshipers cheering the carnage.

Why can’t those Hindus evolve a bit and employ low-paid workers to do their killing for them, behind closed doors preferably, so we can still read our children storybooks filled with sweet farm animal heroes and not feel like hypocrites as we lick their bones clean on our own holidays?

The Hindu festival of Gadhimai results in about 300,000 animal casualties annually, and, in theory, Hindus are refraining from meat the rest of the year (and many Hindus are disgusted by the killing during the festival).

In fact, we’ve made every day a holiday deserving a fitting feast. By USDA estimates 9.1 billion land animals are mechanically raised, shipped, lined up in terror as they are moved closer to the noises and smells of blood and death, and ultimately killed for our beliefs.

That amounts to around 25,000,000 innocents a day killed here in our country. Is it any less of a bloodbath because we’re neater about it?

If we don’t need meat to survive and thrive, then our slaughter of billions of lives is as primitive, unnecessary and cruel as any Gadhimai festival.

Our actions do not excuse the killing at Gadhimai. But we should use our disgust of that spectacle to shed light on our own culpability.

The Thanksgiving Day Massacre: A House of Horrors – Why give thanks by slaughtering sentient beings?