Greener IdealHelping you live sustainably
More
Home Videos Cause and Effect: The damage humans have done in Earth’s history 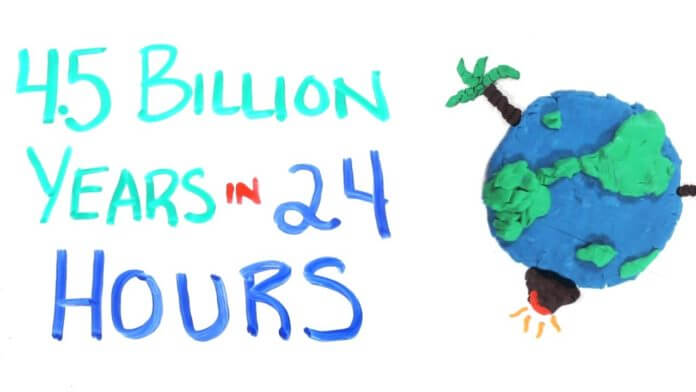 What would it look like if we took Earth’s 4.5 billion year history, and stuffed it into a normal day’s 24 hour time-frame?

That’s exactly what a new video by AsapScience answers.

It puts how humans fit in the 4.5 billion history of Earth into perspective in a fun animated video.

It breaks the history down into a smaller time frame that post people can easily understand—a 24 hour day.

By compressing 4.5 billion years into 24 hours, the video makers are able to let the viewer know how significant (or insignificant) our species time on earth has been.

The significance of this video, apart from being informative in a short span of time, lies in the realization that if we really are such a small fragment of Earth’s 4.5 billion years of life, then how are we doing so much damage.

What have humans done to the Earth?

In our “few seconds” of recorded history, we have manages to destroy the environment both directly and indirectly.

Directly, we are responsible for environmental disasters including causing ecological trauma in the Gulf of Mexico dead zone, the Tennessee Coal Ash Spill in 2008, the Al-Mishraq Fire in 2003 and the ecocide in Vietnam in the 1960s and 1970s.

The list could continue of how our mistakes and intentional decisions have hurt the environment.

Indirectly (using the word ‘indirectly’ is generous in this context), we have been responsible for far worse.

According to a study, led by climate scientist Jonny Day at the National Centre for Atmospheric Science at the University of Reading, the loss of arctic sea ice is, at the very least, 70 percent man-made.

And that’s just the low ball estimate — the study shares that climate change could be up to 95 percent due to human-induced climate change!

This research, published online in the journal Environmental Research Letters, stands apart from previous research which only attribute half the loss to man-made climate change and the other half to nature taking its course.

What’s more, another study, which appeared in the journal Plos ONE, found that Brazil’s Amazon rainforest, which once was known for its biodiversity, is currently the poster child of extinction.

The biologists found that numbers to be shocking — for instance, only 767 populations of mammals of 3,528 still existed.

Additionally, the coral reefs, which habitat a quarter of marine wildlife, are severely endangered and have seen a steady decline in the past decades around the world.

In Australia, for example, the Great Barrier Reef has had a 50 percent decline in the last 50 years.

What’s more, scientists have estimated that all the coral reefs in Southeast Asia could disappear in this century resulting in a 80 percent decline in food availability.

And it’s not just the reefs, the rainforests and the glaciers.

We are facilitating the extinction of many species that habitat our planet. Whales, for example, were found to be a victim of our actions.

A report published online Oct. 1 in the journal Conservation Biology found that whale deaths over the past 40 years in the northwest Atlantic Ocean were mostly human-caused.

Led by Julie van der Hoop of the Woods Hole Oceanographic Institution in Massachusetts, the study looked at 1,762 known whale deaths and injuries from the year 1970 to 2009 amongst eight species of large whales in the region.

The study found that of the cases where cause of death was found, 67 percent could be blamed on humans.