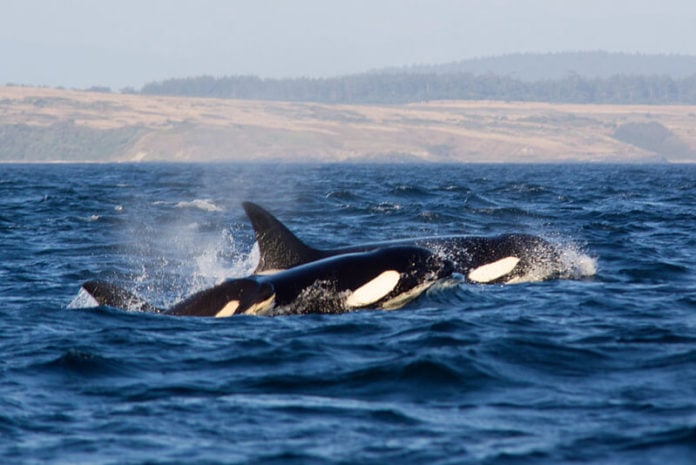 A unique species of resident killer whales living off the coast of Washington’s iconic Puget Sound has unwittingly garnered the ire of big ag.

NOAA Fisheries announced early last week that it will consider the request during its nine-month review process.

You’d think that these orcas were dumping agricultural runoff right on these farmers’ crops rather than the other way around, but it seems that the sin these legendary marine mammals have committed is living in the very manner that makes them so unique.

Puget Sound’s resident killer whales are one of the only groups of orcas whose primary diet consists of salmon. For salmon to exist, they need rivers. For rivers to exist, they need water. And for large farms in the Central Valley to profit, they need massive amounts of water from the Sacramento-San Joaquin river deltas.

For example cotton, grown on Coburn Ranch along with other crops, is what the World Wildlife Foundation (WWF) refers to as a “water wasting crop.”

According to WWF, one cotton T-shirt costs about 20,000 litres of water to produce, and accounts for a disproportionately high percentage of pesticides which make their way into the ocean destroying entire ecosystems.

More water sucked from the river for large-scale agriculture means the orcas get assaulted on two levels – less of their main source of food, and more pollution fouling their home.

It seems that because the 85 resident orcas need the few salmon left to survive and hopefully someday recover to a healthy population – the point of ESA protections – access to river water for these farms has been restricted so that the rivers and all that depend on them simply to live are allowed to do so.

The Southern Resident Killer Whales consist of three separate families, known as J,K and L pods. According to NOAA, these pods were granted protection under the Endangered Species Act in 2005 after groups like the Center for Biological Diversity filed a petition proving that these orcas are a distinct population in terms of genetics, culture and dialect.

After the standard five-year review, NOAA determined just last year that no change was needed in the listing status.

Now, because big agribusiness is being inconvenienced by science and the logical conservation steps that have been taken as a result, vital time and energy is being redirected from working toward recovery for this dwindling population into fighting assaults by those who would choose profit over the very existence of a species.

Pacific Legal Foundation’s petition argues that the Southern Residents are not a subspecies, and basically makes the case that the loss of these three families would not be terribly meaningful because there are other orcas that look pretty similar swimming around in other areas of the ocean.

“If there was ever a poster child for this type of subspecies, it’s the killer whales,” Fred Fellman, an advocate for the original petition for the listing, told the Seattle Times. “It’s not just their genetics, it’s culture. These clearly are the tribes of the sea, and if you extirpate that population not only do you lose the genetic code, you lose a unique brain trust.”

If we allow these creatures to just quietly fade away, we lose. Period.