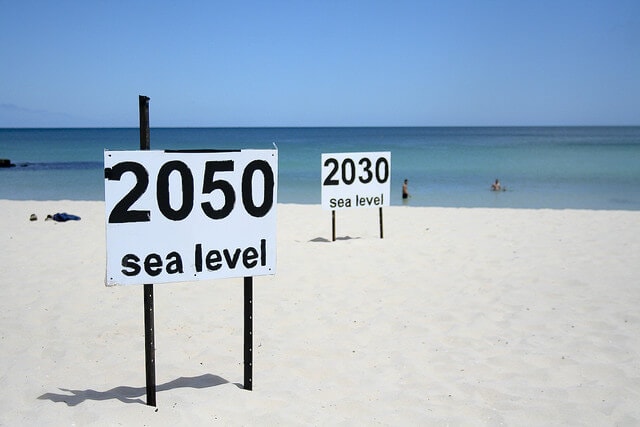 New research from the Potsdam Institute for Climate Impact Research has found that the global rise in sea level is happening 60% faster than the projections by the U.N. Intergovernmental Panel on Climate Change (IPCC).

“Results show that global temperature continues to increase in very good agreement with the best estimates of the IPCC,” the authors of the new study write. “The rate of sea level rise of the past decades, on the other hand, is greater than projected by the IPCC models. This suggests that IPCC sea level projections for the future may also be biased low.”

It contrast to the physics of global warming itself, sea level rise is much more complex. To improve future projections it is very important to keep track of how well past projections match observational data. The new findings highlight that the IPCC is far from being alarmist, and in fact in some cases rather underestimates possible risks.

Wondering how different the two projections are? The IPCC projected that sea level rise is happening at the rate of 2mm per year, whereas the new research estimates that sea levels are rising at an average rate of 3.2mm a year. What’s more, these findings don’t even account for the ice flowing into the sea from Greenland and Antarctica.

The authors conclude their findings, writing:

The rise in CO2 concentration and global temperature has continued to closely match the projections over the past five years, while sea level continues to rise faster than anticipated. The latter suggests that the 21st Century sea-level projections of the last two IPCC reports may be systematically biased low. Further support for this concern is provided by the fact that the ice sheets in Greenland and Antarctica are increasingly losing mass (Rignot et al 2011, Van den Broeke et al 2011), while those IPCC projections assumed that Antarctica will gain enough mass in future to largely compensate mass losses from Greenland (see figure 10.33 in Meehl et al (2007)). For this reason, an additional contribution (‘scaled-up ice sheet discharge’) was suggested in the IPCC fourth assessment. Our results highlight the need to thoroughly validate models with data of past climate changes before applying them to projections.

Globally, rising sea levels threaten about a tenth of the world’s population who live in low-lying areas and islands which are at risk of flooding, including the Caribbean, Maldives and Asia-Pacific island groups. According to the World Wildlife Fund (WWF) reports that low-lying island nations, especially in equatorial regions, have been hardest hit by this phenomenon, and some are threatened with total disappearance. What’s more, ocean warming alters the marine food chain, results in ocean acidification and threatens Antarctic wildlife by potentially endangering populations of penguins, whales, seals and a host of smaller creatures within a few decades.