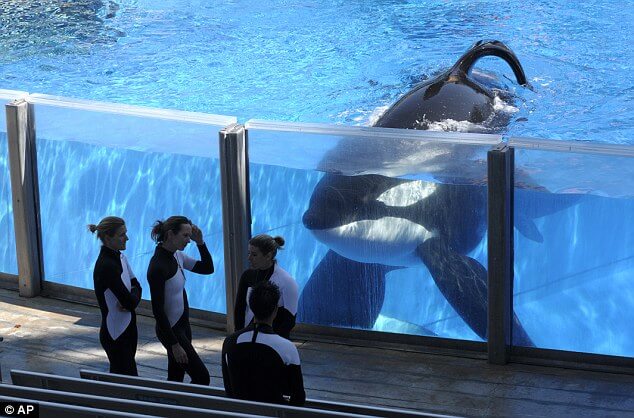 In the wake of South Dakota ranchers getting into a tizzy about vegetarian rocker Joan Jett’s planned appearance on the state’s Macy’s Thanksgiving Day parade float, Joan jettisoned herself to another float and is sure to wow the crowds wherever she lands.

If only Macy’s would take such swift action against SeaWorld‘s “Sea of Surprises” float commemorating the orca prison’s 50th anniversary. The real surprise is that despite the overwhelming public condemnation of SeaWorld in the wake of the documentary Blackfish and after hearing from nearly 80,000 people who are appalled about the situation, Macy’s remains resolute.

SeaWorld’s fantasy float features wild orcas and other marine animals joyfully swimming through the ocean’s waves—a depiction as far removed from reality as the claim that Rob Ford is sober. Orcas at SeaWorld spend every minute of every day confined to tanks that, to them, are little more than YMCA swimming pools. They are so depressed and frustrated that some gnaw on the metal bars separating the tanks, breaking their teeth in a painful manner in the process. Most die far short of their expected life spans.

Even if Macy’s officials are among the few who haven’t seen Blackfish, the overwhelming public condemnation of SeaWorld should be reason enough to pull the plug on its 50th anniversary float. Macy’s officials are sticking with their claim that the parade is about entertainment, but allowing SeaWorld to participate in the parade is indisputably an endorsement of animal suffering.

The comparisons are apt. After all, a Macy’s spokesperson defended SeaWorld’s inclusion by saying that the parade is “without judgement.” As professor emeritus of political science at Manhattan’s Hunter College Kenneth Sherrill put it, “[S]aying ‘I’m not getting involved’ means you’re supporting the status quo.” Thirty-seven orcas have died at SeaWorld (and none from old age) as well as many dolphins and other animals. Many others will die also as long as the marine abusement park crams intelligent, social ocean dwellers into tanks. The best PR team in the world can’t spin the carnage as something to “celebrate.” Macy’s needs to step up and tell SeaWorld that it is not welcome.