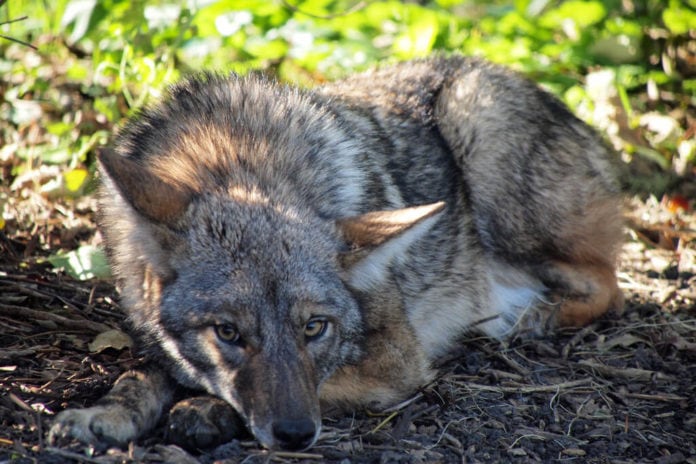 A controversial coyote killing contest in Los Lunas, NM, scheduled for this weekend, will reward the hunter who brings in the most dead coyotes with a semi-automatic rifle.

Gunhawk Firearms is sponsoring the contest, which will take place partly on public land, after another gun store canceled when confronted with common sense.

Online petitions gathering tens of thousands of signatures from around the world, including some “purist” hunters and ranchers, seem to be  having little effect other than strengthening the resolve of a very small minority of blood thirsty ignoramuses that it is somehow their right to slaughter en masse a wild animal theoretically owned by the greater public.

One petition has close to 30,000 signatures, and up until a few days ago, the slaughter contest had about 100 participants signed up.

Shouldn’t the default go to the majority? Unfortunately for the long-maligned coyote, there are absolutely no laws in place to protect them from being massacred at any time of the year. And no permit is required to hunt coyote in New Mexico.

Supporters of the contest are pulling the same shallow and consistently debunked excuses to defend their shocking insistence that piling up bodies of an integral part of their wild ecosystem for no other purpose than to joy of killing is a perfectly sane way to spend their free time.

Of course, any opposed to the senseless slaughter is labeled a “gun grabber,” “tree hugger,” or otherwise “wacko environmentalist,” despite many of those voicing opposition being gun owners and hunters themselves.

My personal all-time favorite has to be when these extremist hunters extol the service they are providing to the poor ranchers who lose a few of their animals every year to coyotes. These innocent ranchers can’t afford to spend their time killing coyotes all day so these good old boys are there to donate their time to protecting America’s heart attack supply.

I’m very sure that when the resident garden supply store sponsors a weed pulling contest at the surrounding farms these guys will be the first to sign up.

Then there’s the old coyotes-as-evil mindset. One commenter warned all “city people” that they had never seen the look on the coyotes’ faces as they wait for a newborn calf supper, which, of course, they eat alive.

Having done my time serving carnivores in restaurants, I can attest the look on any wild animal’s face couldn’t compare with many a diner having to wait an extra few minutes for their veal scallopini.

And do they really think we didn’t notice that the very same animals they are so disgusted by the coyotes for wanting to eat are being raised to be eaten?

Really. You couldn’t make this stuff up if you tried.

While coyotes may take a few horrible minutes to kill their newborn prey, the months many calves spend locked alone in dark confinement before slaughter as veal seems somehow perverse on a much higher level.

Highly social and intelligent, coyotes play an important role in their ecosystem by keeping populations of smaller animals, like raccoons, rats, and skunks, in check. They have proven to be keenly altruistic, even bringing food to friends caught in leg traps or injured. And coyotes are surprisingly monogamous, as one study in Chicago found a 100 percent till-death-do-us-part rate among that city’s population.

Even the owner of the gun shop sponsoring the killing contest admitted that science has proven that the more coyotes you kill, the more they breed, creating even more than you started with.

“When you go out and hunt coyotes,” organizer and Gunhawk owner, Mark Chavez told the Albuquerque  Journal in a scathing editorial condemning the contest, “they change their behavior and reproduce more.”

So, let’s go over this one last time. These hunters will not eat the animals they kill. They want to help ranchers out but their mass slaughter will only increase the amount of hungry coyotes looking for their native prey that are increasingly pushed out by livestock. Yet ranchers consistently refuse to take simple steps like keeping herd dogs and building fences to protect their investment from any losses. Any other industry would be ridiculed for not properly protecting its product.

The Second Amendment says nothing about any right to wildlife terrorism. Members of the armed public keeping firearms for self protection need to distance themselves from the extremist NRA agenda that has turned gun rights into the inalienable right to destroy whatever the person with the gun feels like destroying.

The killing contest starts Saturday. You can sign Animal Protection of New Mexico’s petition to stop it  here.

To prevent future insanity, you can contact the governor of New Mexico here.