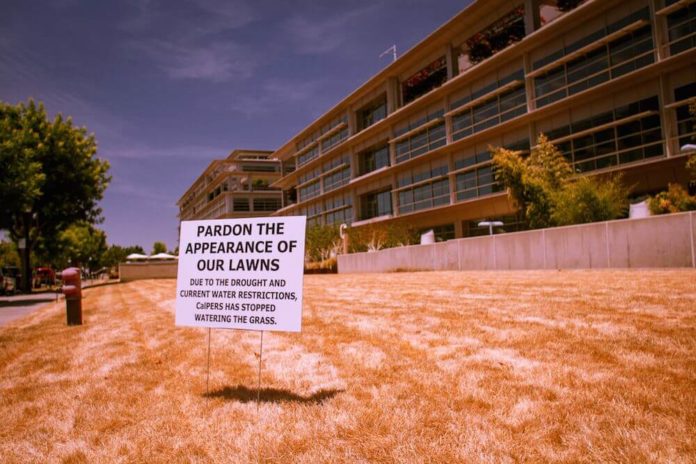 [sam_ad id=”80″ codes=”true”]Our food choices have more impact on water conservation than anything we can do at home.

Freedom and common sense collide somewhere west of the Mohave Desert in a land called Los Angeles. As a California resident, I’ve heard of this record-breaking drought, but there’s nothing here to indicate it really exists.

While Central Coast Coho Salmon go extinct for lack of river water, I’m free to soak a patch of grass that has no business growing in this climate.

Regulations and laws have been passed indicating what times I can legally waste water on the lawn, but we all know the cops have better things to do and the water posse has yet to be organized.

So the regulations are a joke, but far worse than the impact of that little tinge of guilt that comes from watering your lush grass carpet at noon in 90 degree heat, the new laws ensure that we’re sufficiently distracted by the myth that peeing in our shortened showers will save enough water to salvage the salmon.

Gov. Jerry Brown first tried to cajole Californians into a voluntary water reduction of 20%. Now, we’re subject to fines for things like washing our cars without a shutoff device on our hoses, and hosing off sidewalks and driveways.

Studies have shown that more than 50% of residential water use goes to outdoor landscaping, and this number could be higher depending on the various climates existing throughout California.

But the really significant number that is being downplayed by a state that wracks in $44.7 billion a year in agricultural products coming from its 80,500 farms, making it the number one state in the country for farm income, is that 80% of the water used in California goes to this industry.

And, according to the Pacific Institute, if all these farms implemented more sustainable water use technologies and practices, the savings would be equivalent to the surface water Central Valley farms are lacking this year.

Yes, we need to eat. But not all food is created equal in terms of water use. We produce 99% of the almonds in the United States, which requires 10% of our total water supply each year. We’re second in the country for cotton, another disproportionately thirsty crop.

Then there’s the alfalfa we grow, which we don’t eat outright, feeding it to our dairy cows in order to squeeze out some milk, of which California produces 21% of the nation’s supply.

Alfalfa accounts for 15% of our state’s water use. And 30% of the alfalfa we grow is exported, a Slate article reported. That’s 30% of the water dedicated to hay that we’re exporting in the middle of the worst drought on record.

Which leads us straight to the real culprits – animals. No, not the wildlife risking traps and traffic to sneak into our neighborhoods to steal a drink from the urban virtual oasis we have built up over the natural oasis that once existed here in Los Angeles.

It’s the animals we really like – marinated, ground up, roasted, baked (if you’re health conscious) and sucked dry.

Ideology aside, to get all the meat Americans are entitled to under basic human rights standards, we’re literally sucking ourselves dry.

“Producing 1 kg of animal protein requires about 100 times more water than producing 1 kg of grain protein,” according to a study in the American Journal of Nutrition. “At present, the U.S. livestock population consumes more than 7 times as much grain as is consumed directly by the entire American population.”

All this water adds up from the crops used to feed the animals, daily hydration requirements, cleaning excrement off the floors, washing blood and guts from the butchering equipment and other uses that go into the processing of animals into packaged “food.”

Beef is by far the most irresponsible commodity, with one pound of cow flesh requiring up to 5,000 gallons of water to produce, as opposed to just 154 gallons for a pound of wheat bread.

But I’m gluten free! Well, have some potatoes. It takes about 30 gallons of water to give life to one pound of potatoes, as opposed to 896 gallons for a pound of cheese.

[sam_ad id=”88″ codes=”true”]But man cannot live on potatoes alone! Not that I’m suggesting this, but a study on the Polish peasant diet, which was almost exclusively made up of potatoes, showed that tubers alone provide enough nutrition to not just survive, but thrive. Point being, we don’t need to have our cake to have something to eat too.

So how can the drought be as bad as I’m being told when I can get as much water as I want for whatever I want? Sure, I might have to suffer a disapproving look here and there when I hose down my driveway, but I can handle that.

Humanity has always had a cushion against drought – aquifers, or underground collections of water that has been seeping down below the surface of the Earth for millions of years.

“Today, estimates say that places like the Central Valley are withdrawing groundwater at twice the rate of natural recharge. To exacerbate the situation, many of the open spaces that could help refill aquifers are now covered over with houses, roads and parking lots,” a Stanford University study reported.

“Many parts of California are well acquainted with groundwater overdraft,” the study continues. “One of the most visible signs of overdraft is the gradual sinking of the ground – called subsidence – as groundwater depletion continues over time in a basin. The Central Valley has been sinking over the course of the 20th century, a condition that has been described as the single largest human alteration of the earth to date.”

Instead of being even slightly encouraged to change our all-life-threatening behaviors like having potatoes for dinner rather than a T-bone, we’re being told they’ll get us for watering our little gardens on a Tuesday rather than a Sunday.

And some of our politicians attempted earlier this year to pass a bill that would have sentenced a number of native fish to extinction, including the federally threatened Delta-smelt, by stealing the water they need to survive to give more cheap water to the giant corporations cashing in on the fruits of Central Valley farmland.

Central Valley Republican Devin Nunes, in an attempt to make the Delta-smelt (as well as the Endangered Species Act) the scapegoat for our culinary Romanesque overindulgences, stood in front of the House of Representatives and went on record as calling a fish known for its inexplicable ability to survive in extreme conditions “a stupid little fish.”

[sam_ad id=”83″ codes=”true”]But continuing to suck our aquifers dry is bankrupting our children of any chance at survival in future droughts. We are literally choosing extra cheese on our quarter pounders over our kids even having a garden to water with their own children.

There was an oasis on the Arabian Peninsula more than 1,500 years ago that gave life to a towering city called Ubar in the midst of a sprawling desert. Then one day, as camel caravans made their usual trek down the well-trodden roads leading to this mythical land, it was no longer there. According to legend, God smote the sinful city and destroyed it with sand.

Now we know it was built over the aquifer that made life there possible, and after the growing population tapped it almost dry, the city sank into the sinkhole created by the missing water.

This story seems pertinent now. In our times decadence rules under the guise of freedom, and in my California oasis slaughterhouses are free to hose down their bloody concrete as “stupid little fish” swim precariously on the border between excess and environmental suicide.