I was raised with a father who would regularly feed us food that was technically passed its best-before date and I remember thinking it was really gross. I mean, the label says this is gone off? Why are you feeding us this food?

But as I get older and sell-by dates seem to be getting shorter, I have noticed that I’m paying less and less attention to them. There were just too many times that I had eaten a spoonful of yogurt, only to realize on further inspection it was past its “best before” date. It tasted fine to me, and I didn’t get sick.

It was only recently that I put some more research into the odd phenomenon that I discovered that the “sell-by”, “best by”, “best before” and “enjoy by” are actually only guidelines that food manufacturers create to advise retailers when they think their food is at their prime. None of them are regulated by the FDA – everything except for baby formula, that is.

Most often, food is still edible for a few days, sometimes even weeks, after the suggested date on the label.

But it’s all so ingrained into our minds that once a label says a food product is out of date, it must be so, and we trash the food. This isn’t a generalization. The stats support this. In fact, Americans alone waste $165 billion of food each year! That’s 40% of all the food in the United States of America that goes uneaten.

But where there’s a problem, there’s always a solution just waiting around the corner.

Bump Mark, created by Solveiga Pakštaitė, is a new food label meant to safeguard against pre-emptive trashing of food.

The label is made of four different layers. From top to bottom they are: A plastic film, a layer of gelatin, a plastic bump sheet, and another piece of plastic film.

The idea is that as long as the label is still smooth to the touch, the food is still OK to eat.

“Because gelatin is a food, the same things affect it as the food inside a package,” explains London-based designer Solveiga Pakstaite, a finalist for the James Dyson Award. “It has an interesting property that when it expires, it turns back into a liquid. I couldn’t just use any natural substance — it had to be one that changes its state”.

And it can be used for any product, just so long as the concentration of gelatin is changed to match the specific food product. For example, weaker concentrations break down faster for foods that don’t last as long, such as meat and milk. As Pakastaite states: “You can actually adapt this to any kind of product”

Obviously, the new label would be slightly more expensive than your average sticker, but it seems like a small price to pay considering the huge amount of food that’s wasted every year.

Pakstaite is currently looking for a commercial partner to back Bump Mark, and I’m sure you can join me in wishing her good luck! 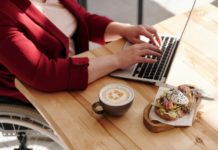 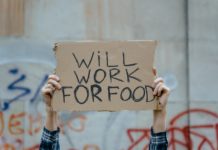 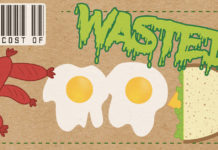 The Cost of Wasted Food [Infographic]