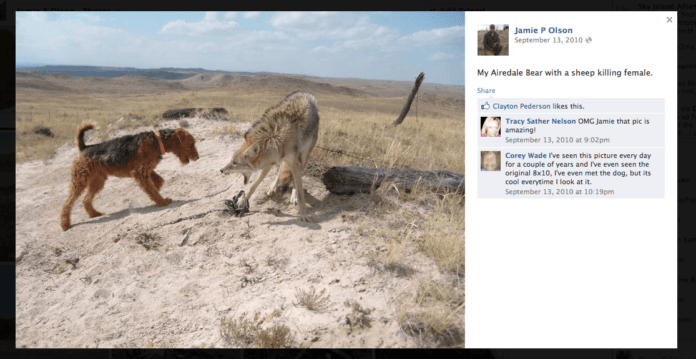 A federal Wildlife Services employee is under fire after pictures of gratuitous animal abuse and torture were posted on his Facebook page filed under “work.”

Jaime Olson, a trapper for USDA Wildlife Services, looks to enjoy his job.

Proudly displayed on his public Twitter account and on his Facebook, some of the photos show defenseless coyotes, a raccoon and a bobcat all caught in leg hold traps being attacked or harassed by Olson’s dogs.

In one photo, a disemboweled coyote is laid out on a log with a caption reading: “Eagles got to this adult female before I did.”

And we are paying for this sick individual to indulge in this violent and sadistic behavior.

Not well known for its scientific practices, nor inclination toward progressive methods of animal control, USDA Wildlife Services has recently come under intense public and scientific scrutiny thanks, in part, to an extensive three-part exposé published in the Sacramento Bee which described the millions of animals this branch of the USDA kills using barbaric poisons and leg traps at the whim of ranchers and hunters wanting more game animals to themselves.

More recently, the city of Davis, California, terminated its taxpayer-funded contract with Wildlife Services after outrage over the killing of five coyotes – four of them babies – was carried out without consulting the city.

But these coyotes were the lucky ones. Death in a steel-jaw leghold trap is tortuous, terrifying, drawn out and ultimately indiscriminate.

USDA guidelines suggest leg traps be checked once a week. And its own records show that about 10,000 to 14,000 animals are killed by this method every year, including many non-target animals like bald and golden eagles and even pet dogs and cats.

Olsen is employed by an organization in the business of killing lots of animals by gruesome means. Are we really that surprised that he enjoys tormenting these creatures a bit further before killing them? 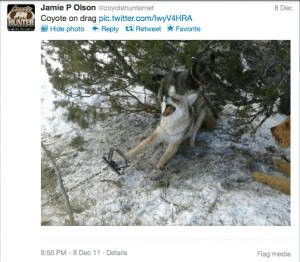 Tom Knudsen, the Bee reporter who wrote the original investigative series of Wildlife Services reported that the photos have now been removed from Facebook, and Olsen, when questioned, played dumb.

Knudsen quotes a former Wildlife Services trapper as saying that Olsen’s behavior is standard and pretty much ignored by higher-ups.

“You can’t look at this and associate it with wildlife management,” executive director of Predator Defense, Brooks Fahy, told the Bee. “This is cruelty and torture. This is wanton killing.”

The City of Davis decided it didn’t have room for cruelty, torture nor wanton killing and told Wildlife Services to take a hike. Maybe it’s time for more cities to follow Davis’ lead.