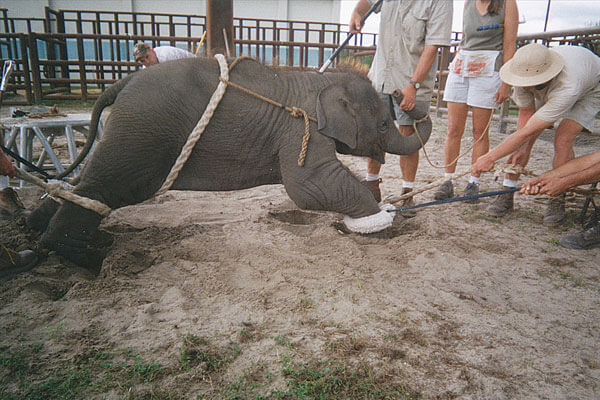 After taking on the massive pet overpopulation issue with a ban on the sale of dogs and cats in pet stores, the Los Angeles City Council is now considering an outright ban on the use of wild and exotic animals in circuses.

The Los Angeles Board of Animal Services Commissioners recommended that the council consider a variety of options ultimately meant to address the growing realization that elephants and other exotic animals suffer tremendously in the unnatural environment of show business.

These options include forbidding a show from having these animals perform, completely banning exotic show animals from entering city limits, or, the council could choose to simply ban the bullhook – a stick with a large metal hook on one end used to “control” and “persuade” elephants to do what their trainers want them to do.

Considering circuses have made it clear that there is no way to have the kind of close contact they need to have with the animals without using the bullhook, a ban on the device could mean the circus would have to take its abuse elsewhere.

While the City of Angeles considers which route to take to rid the city of yet another form of exploitative abuse for profit, the United States Congress is also being faced with supporting or opposing the use of exotic animals in performing shows.

H.R. 3359, the Traveling Exotic Animal Protection Act, introduced by Rep. Jim Moran (D-VA), would restrict the use of exotic animals in traveling shows.

Great news for animals suffering in the zoonotic freak shows masquerading as educational venues, and not totally unattainable as many countries such as Costa Rica, Bolivia, Denmark, Sweden and Singapore have banned elephants and other sensitive wild animals from circuses, but for quicker and more reliable action we need to keep our eyes and our opinions on the Los Angeles City Council.

After Sarah, a 54-year-old elephant collapsed while being forced into her train car after the Ringling Bros. and Barnum & Bailey Circus performances in Anaheim last year, public outcry in the region over the use of these magnificently sensitive and highly intelligent, social animals to do ridiculous tricks mounted.

Then, Mother Jones Magazine released a year-long investigation into that same circus blowing the top off the show’s claims that it treats all its animals humanely. The investigation found deathly sick elephants being forced to perform until collapsing and dying, perverse beatings, electric shocks, train rides of up to three days with no breaks and the routine separation of baby elephants from their mothers.

In the wild baby elephants nurse for two to three years and may remain with their mothers for their entire lives, Ringling Bros. removes babies kicking and screaming from their mothers at barely a year old.

Since that November 2011 article was published, the USDA slapped Feld Entertainment (the owners of what’s being called the “Cruelest Show on Earth”) with a $270,000 fine for animal welfare violations, the largest fine since the act was passed 40 years ago.

We can keep spending taxpayer money on failed regulations and lax USDA investigations while another generation of our children is educated by parodies of real life, or we can tell the circus that it simply cannot continue to profit from the misery it imposes on the creatures in its care.

Tell the Los Angeles City Council that there is no room for archaic and abusive entertainment within the boundaries of a modern, first-class city.

Take action to support the federal ban on wild animals in circuses.