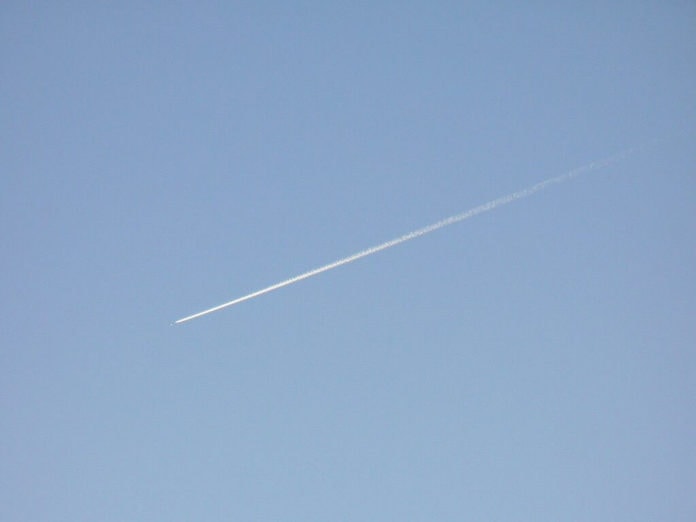 Look up in the sky and you’ll see those beautiful white strips of clouds that jets leave behind. While those may just seem like simple innocuous clouds, jet exhaust can actually be posing a problem.

In fact, airports across the world could pose a bigger threat than once thought, especially when sunlight hits the exhaust a plane spews out. Research now shows that oil droplets spewed by idling jet engines can be poisonous when these penetrate lungs and brain.

A study made at Carnegie Mellon University in Pittsburgh now shows that while the exhaust of engines high up is certainly a bad thing, the particles emmited are mostly solid particles, meaning they are pollutants but not of immediate danger. On the other hand, when a plane idles on the runway or at the gate, the emissions take on the form of microscopic droplets.

In the study, researches piped exhaust into a Teflon bag. When the bag was full, they uncovered it and allowed sunlight to create the normal chemical reaction it does in the open air.

In just a few minutes, solid particles were created. They found that the sunlight’s oxidation of the exhaust emitted at idling speeds can generate about 35 times more particles than originally thought.

Robinson, the scientist leading the experiment, pointed out that if you multiply this by the 46 jets that are often waiting in line for takeoff and waiting an hour in idling, then it amounts to a substantial amount of pollutants emitted into the air.

Basically, what they say is that the chemical reaction created by the sun boosts the jet pollutants in the air.

The thing of it is, we haven’t really considered how jet exhaust could be significantly affecting the air, especially the airspace over airports. The amount of particles emitted by aging gases and hydrocarbons is hard to figure out, but that’s where a lot of the atmospheric chemistry is going on.

Currently, we are reducing the pollution emitted by cars, trucks and smokestacks, but at the same time airport emissions are climbing. Experts say these pollutants tend to be localized within a few miles of an airport, but these findings show that these ultrafine particles could be hazardous and cause negative health effects, at least to those living nearest an airport.