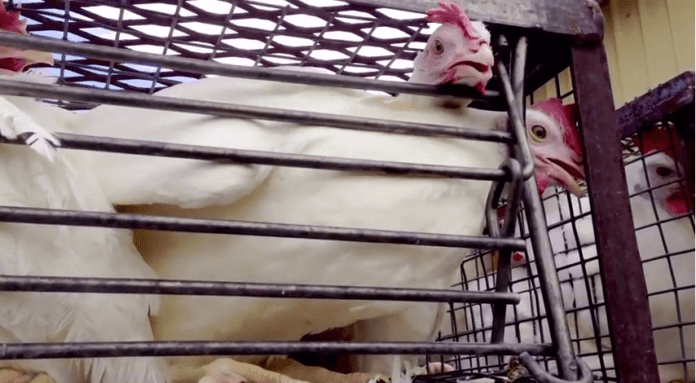 Last week, Ethan Brown, founder and CEO of Beyond Meat declared that his processing facilities are open to the public to visit without notice. This declaration was made in the wake of a salmonella outbreak which sickened more than 300 people in the U.S. The origin of the outbreak was traced back to poultry producer Foster Farms in California. Brown, whose company produces vegan meat substitutes, wrote that “You have the right to safe and clean protein. I can’t control what animal meat producers do in their facilities, but I can promise you that we’ll always put your health and safety first.” He said some have already taken him up on the offer and visited the factory, “and we certainly hope more people will!”

Brown and Beyond Meat did not contact these companies directly, so I attempted to alert them to the challenge myself. I was not able to get a response from any of them. Certainly, Ron Foster is busy doing damage control and the other poultry producers are sweating, hoping they don’t send out contaminated meat.

Perusing the websites of these mega meat companies is like a window into an alternate reality, because the claims being made by the companies are contrary to my basic understandings of the animal agriculture industry in the U.S. For example, Foster Farms claims that it spends “a lot of our time making sure that Foster Farms products are the safest, highest quality products available.” Obviously not enough time. And what an enormous amount of trust we put in food producers, that they will stock our grocery stores with clean, safe food. It is rather similar to eating in a restaurant and not knowing what is going on in the kitchen; is someone spitting in the food? Or something even worse? This is why the open-doors transparency of Beyond Meat is so exemplary.

Ethan Brown’s primary concern given the recent outbreak is food safety, but I would argue that in the animal agriculture industry, animal welfare is the most pressing transparency (or lack thereof) issue. And yet again, each website each corporate platform make assurances of the highest care for each and every animal, because it makes for a “better product”. For example, Tyson Foods, one of the companies named by Brown, states that “taking proper care of animals—treating them responsibly and with respect—is the right thing to do. It also makes great business sense.” Interesting, because last year, an undercover investigation emerged about pig abuse at a Tyson Supplier. These types of undercover investigations that expose abuse and cruelty appear frequently, and yet each company claims to care about animals. It doesn’t add up, so someone has to be lying.

Nathan Runkle, Executive Director of Mercy for Animals (MFA), says “no amount of PR spin can sanitize the cruelty inherent in modern meat production”. MFA acts as a sort of transparency prophylactic for those of us that don’t take animal exploiters at their word. Runkle says “Mercy For Animals investigators go in as the eyes and ears of the public”. Why? Because “The factory farming industry thrives in secrecy and works very hard to keep the public from seeing how animals are treated before they end up on our plates.”

And on Sunday, as I was contemplating these transparency issues, MFA Canada released an undercover investigation exposing shameful treatment of hens in factory farms (eggmcmisery.ca), reminding me what real transparency is (disturbing video embedded below). These companies can pay all the lip service they want to warm and fuzzy ideas of stewardship, values, respect, well-being, etc., but how much control do they really have over what happens at ground level? How much control does the restaurant manager really have over the line cook who spits in the soup?

There have been various initiatives to make factory farms and abattoirs more transparent, such as Closed-Circuit Television for all Slaughterhouse, but, as Runkle says, “the factory farming industry thrives in secrecy”, which is why it hopes people will read a reassuring website and trustfully keep buying the products. That is not real transparency. Real transparency is when I can visit a facility any time of the day, without notice, and stay as long as I like. You will have to excuse me if I don’t have blind trust in companies that make billions of dollars raising and killing animals.