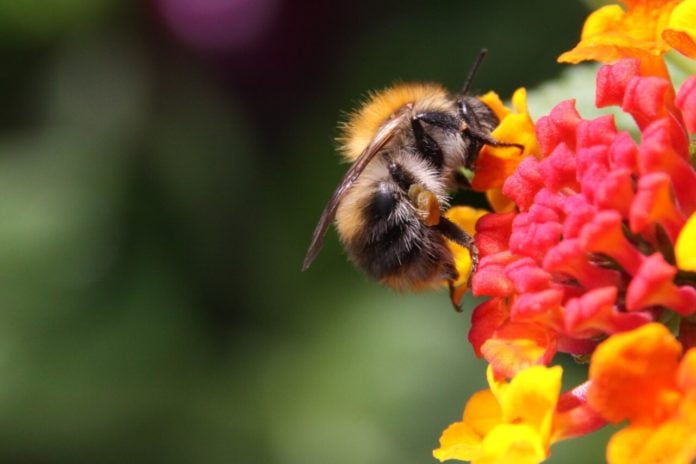 A new report in Nature proclaims that exposure to neonicotinoid and pyrethroid pesticides “impairs natural foraging behavior and increases worker mortality” in bumblebees, “leading to significant reductions in brood development and colony success.” The exposure levels cited in the report are similar to those found in fields.

The study, which looked at bumblebee colonies composed of approximately 40 bees each, found that exposure to pesticides resulted in the deaths of roughly two-thirds of the bees.

There’s no denying that bees are important for our environment, and bumblebees have an important role. Business Insider states:

“Bumblebees, the subject of the new research, are just as important in providing the pollination that creates much of the food we eat. Tomatoes, for example, rely on bumblebees. Furthermore, bumblebees are very different, bigger in size individually, but living in colonies of just dozens, compared to the tens of thousands in honey bee colonies.”

This news was preceded by the findings of two new research studies published in Science, and reported at NPR earlier this year, that have concluded that  non-lethal doses of neonicotinoids severely disrupt the bees normal reproductive and navigational behavior:

In the first study, researchers at the University of Stirling, in the United Kingdom, exposed bumblebees to low, “field-realistic” levels of a neonicotinoid insecticide called imidacloprid. The bumblebees didn’t die, but in a remarkable and unexpected development, they almost stopped making new queen bees.

In the second study, carried out in France, honeybees that were exposed to another nicotinoid seemed less able to navigate, and many never found their way back to their home hive. This study, however, exposed the bees to higher levels of pesticide, probably higher than most bees encounter in the real world.

In response to these studies, France has announced that it may ban a class of pesticides, Syngenta’s Cruiser OSR insecticide, according to Reuters.

While Syngenta has denied the correlation between bee death and their product, Mongabay sums up:

Despite Sygenta’s statements, studies continue to appear that find a link between neonicotinoid pesticides and Colony Collapse Disorder. Recently, researchers in the U.S. fed tiny doses of neonicotinoid pesticide-laced high-fructose corn syrup, which is commonly used to feed bees, to 16 hives in the field and left four hives untreated. For months all the hives remained healthy, but after around six months over 90 percent (15 out of 16) of the hives fed with the pesticidal corn syrup had collapsed, while the four control hives remained healthy.”There is no question that neonicotinoids put a huge stress on the survival of honey bees in the environment,” lead author Chensheng (Alex) Lu, an associate professor at the HSPH, told mongabay.com.