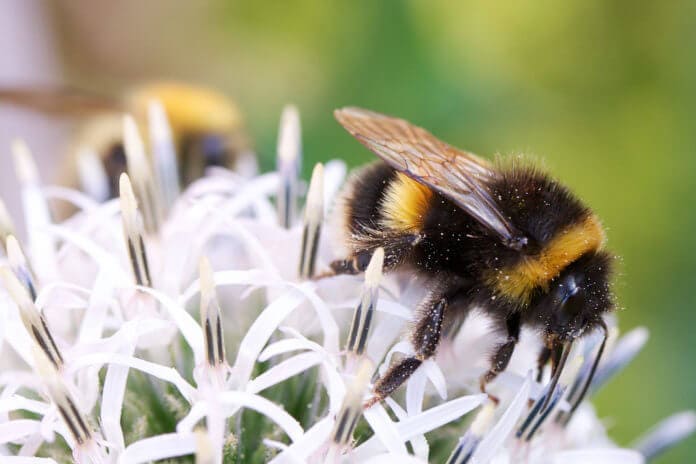 A new study suggests that the pesticides used in farming are killing off worker bumblebees and damaging their ability to gather food. This means that colonies that are vital for plant pollination are more likely to fail when they are used.

The research was conducted by a team of British scientists at Royal Holloway, University of London.

The group says it exposed colonies of 40 bumblebees (which are bigger than the more common honeybee) to the pesticides neonicotinoid and pyrethroid. This was done over four weeks at levels similar to those in fields.

Neonicotinoids are nicotine-like chemicals which are used to protect various crops from locusts, aphids and other pests.

The scientists say that exposure to a combination of the two pesticides “increases the propensity of colonies to fail”.

“Chronic exposure … impairs natural foraging behavior and increases worker mortality, leading to significant reductions in brood development and colony success,” the scientists wrote in the report in the journal Nature on Sunday.

Researchers also highlighted the importance of more rigorous testing of pesticides to make sure they do not target bees.

Richard Gill is the lead author of the newly-released study. According to Reuters, he endorses recommendations by the European Food Safety Authority for longer testing on adult bees and larvae, new ways of assessing cumulative exposure to toxins and separate assessments for different bee species.

Gill said previous studies had mostly examined the impact of pesticides on individual bees, rather than colonies. Bumblebees form colonies of a few dozen bees, while honeybees can number up to tens of thousands.

Reuters had a chance to study the research in more depth. It reports that the average number of bees lost in the experiment (both dead in the nesting box and failing to return) was about two-thirds of the total for bees exposed to a combination of the two pesticides against a third for a control, exposed to neither.

Bumblebees exposed to a combination of pesticides were about half as successful at gathering pollen, used as food, compared to a control. They also devoted more workers to collecting food, meaning fewer were raising larvae.