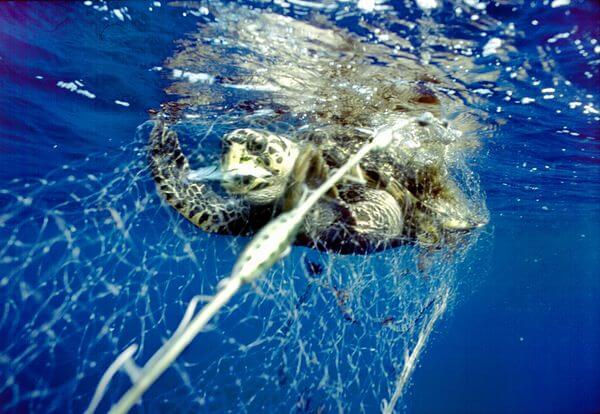 Few citizens are even aware that California continues to allow fishing using drift gillnets, which requires setting nets to soak overnight until a fishing vessel collects them along with any hapless creature who is unlucky enough to be venturing over that area of the sea floor.

Longlining along California’s coast has been banned due its high bycatch of non-target animals, including federally protected marine mammals and endangered species.

The California drift gillnet fishery targets swordfish and thresher shark using nets that stretch a mile in length. But obviously this fishing method collects life indiscriminately from the ocean, resulting in the death or injury (a death sentence in the wild) of more than 130 protected whales, dolphins, seal and sea lions and thousands of other sharks and marine mammals, according to the Sea Turtle Restoration Project.

Anything taken aboard other than a swordfish or shark is dumped back into the ocean – dead, alive or dying. 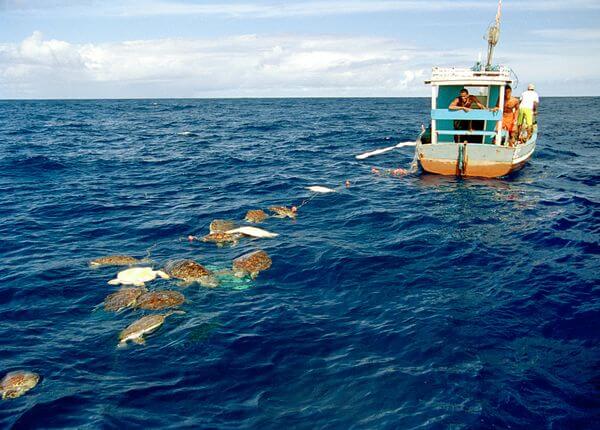 “Curtains of death, in the form of the California driftnet fishery, should be abolished in California waters and need to be phased out as soon as possible,” biologist and executive director of SeaTurtles.org, Todd Steiner said. “Sea turtles, sharks and whales are all being hammered by this fishery that targets high-mercury seafood species that are largely unfit to eat.”

Government observers reported the drowning deaths of two endangered sperm whales in 2010, and estimate that 16 of these whales were killed that year.

The estimate is based on the low observer rate on these fishing vessels – below 12 percent, according to the intent to sue the National Marine Fisheries Service (NMFS) filed by a collection of conservation groups, when the NMFS recommends at least a 20 percent observation rate.

This death toll of 16 whales is 10 times what the population of this endangered marine mammal can withstand without disastrous consequences for its species.

Besides killing protected and endangered species, this fishing method throws back 20 to 30 percent of its catch of fish, further exacerbating the imminent collapse of worldwide fisheries. Not only are humans in trouble as fish provide 15 percent of all animal protein we consume, but other animals who depend on that “bycatch” are finding it increasingly difficult to find food.

One of the primary food sources for leatherback sea turtles makes up an estimated 98 percent of one of the two most frequent discards by California’s drift gillnet fishery, hindering population recovery, according to the intent to sue.

Not only did the Pacific Fisheries Management Council vote in March to pursue expanding the territory for drift gillnet fishing into an area off California now protected for the critically endangered Pacific Leatherback sea turtles, but these ancient creatures who outlived the dinosaurs are being further challenged by another setback to their survival in the age of industrial fishing.

NMFS approved a plan “allowing a Hawaii-based shallow-set longline swordfish fishery to catch more endangered sea turtles while hunting for swordfish in the North Pacific Ocean,” according to Oceana.

This plan, set to take effect Nov. 5, increases the amount of animals allowed to be accidentally killed or injured annually from 16 to 26 leatherbacks and from 17 to 34 loggerheads, an increase of 62 and 100 percent respectively.

“On the one hand the federal government acknowledges Pacific leatherback and loggerhead sea turtles are endangered and that more needs to be done to protect them,” Enticknap said. “At the same time they say it is okay for U.S. fishermen to kill more of them.”