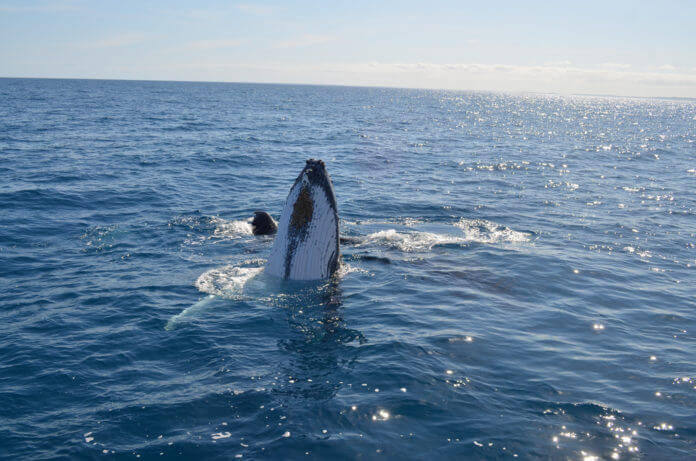 A report published online Oct. 1 in the journal Conservation Biology found that whale deaths over the past 40 years in the northwest Atlantic Ocean were mostly human-caused.

Led by Julie van der Hoop of the Woods Hole Oceanographic Institution in Massachusetts, the study looked at 1,762 known whale deaths and injuries from the year 1970 to 2009 amongst eight species of large whales in the region. The study found that of the cases where cause of death was found,  67 percent could be blamed on humans.

The researchers reveal that the number one cause of death (amongst all species) is getting ensnared in fishing gear, claiming 323 lives of whales. Vessel strikes claimed the lives of 171 more and 248 whales died to unrelated causes such as infection, stranding or other natural causes.

The authors wrote about their method:

We analyzed the spatial and temporal patterns of mortality of large whales in the Northwest Atlantic (23.5°N to 48.0°N), 1970 through 2009, in the context of management changes. We used a multinomial logistic model fitted by maximum likelihood to detect trends in cause-specific mortalities with time. We compared the number of human-caused mortalities with U.S. federally established levels of potential biological removal (i.e., species-specific sustainable human-caused mortality). From 1970 through 2009, 1762 mortalities (all known) and serious injuries (likely fatal) involved 8 species of large whales. We determined cause of death for 43% of all mortalities; of those, 67% (502) resulted from human interactions. Entanglement in fishing gear was the primary cause of death across all species (n= 323), followed by natural causes (n= 248) and vessel strikes (n= 171). Established sustainable levels of mortality were consistently exceeded in 2 species by up to 650%.

The good news is that since 2003, there have been efforts made to cut down on accidents involving whales.

Related:
Win 'The End Of The Line' on DVD Today!

One such example is the 2008 U.S. legislation — the Ship Strike Rule — which introduced restrictions on certain routes and speeds, aiming to reduce the number of vessel strikes on right whales.

The bad news; however, is that the researchers found that no significant change in vessel-strike fatalities have been sen since these reforms have been made.

“So far, regulatory efforts have not reduced the lethal effects of human activities to large whales on a population-range basis, although we do not exclude the possibility of success of targeted measures for specific local habitats that were not within the resolution of our analyses,” the authors wrote.

“It is unclear how shortfalls in management design or compliance relate to our findings. Analyses such as the one we conducted are crucial in critically evaluating wildlife-management decisions. The results of these analyses can provide managers with direction for modifying regulated measures and can be applied globally to mortality-driven conservation issues.”