Amid a long list of various petitions and campaigns circulating addressing the consumption of dogs, and cats to a much lesser degree in South Korea, about 500 Korean Dog Meat Association members rallied Sept. 24 to demand the government legalize the farming of dogs for meat, saying there are at least 20,000 dog farms with six million dogs.

Exact statistics are hard to come by, but it is estimated that around a million dogs and a few thousand cats are killed each year in South Korea to make medicinal elixirs and for direct meat consumption.

Unfortunately for the dogs deemed “meat,” death does not come easy. Packed tightly in small cages pressed against each other, they suffer hours of transport from rural farms to the slaughter houses or the live animal markets. 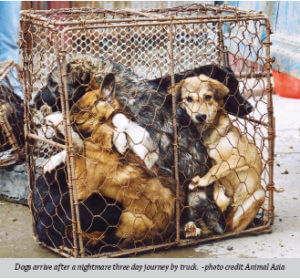 Slaughter houses prefer electrocution for its speed. The markets often club the animal, sometimes leaving it injured but alive, before boiling it. Traditionally, dogs are hung up by their necks and beaten to death to release stress hormones that those who consume the meat that way believe makes it tastier and more healthful.

Koreans have a long history of eating dog meat. Historical evidence shows the practice goes back thousands of years and many modern Koreans consider it part of their cultural heritage.

Cats are neither popular as pets, nor for their meat, but are used mainly as an ingredient in something called “cat liquor,” which is believed to treat arthritis and rheumatism. It is made in the same way as “dog liquor,” by boiling the animal in a pressure cooker until it liquefies, and then straining the liquid and mixing it with herbs.

As revolting as this sounds to the majority of people who view cats and dogs as honorary humans, the majority of Koreans, even those who own dogs themselves and don’t eat dog meat, believe it should be something people have a right to consume if they choose, according to a 2009 study appearing in the Journal of Social Issues.

Strong criticism from the West may even strengthen the desire to protect this aspect of their culture as many Koreans find it hypocritical that westerners condemn the eating of dogs when tens of billions of other species of animals deemed acceptable to eat are slaughtered and consumed in countries that view dogs and cats as pets.

As cows, pigs, sheep, goats, chickens, turkeys, ducks and any other animal the West finds culturally acceptable to eat experience the same feelings of pain and fear that dogs do, we are in a difficult position to pass judgment on the cultures that do include dogs on their menus.

But we can explain the degree to which we find the consumption of certain animals more offensive than others. 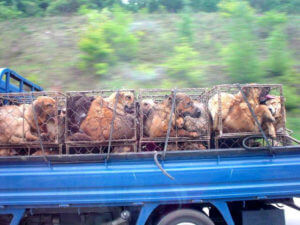 As numerous studies have found, dogs are socially more like humans than any other species on the planet.

For example, our closest relatives, the chimpanzees, have no idea what we’re trying to tell them when we point to something. On the other hand, dogs seem to innately understand human pointing gestures.

Close to 20,000 years of co-evolution has created a bond between our two species like no other we’ve witnessed in our time on this planet. There’s good reason dogs have long been called “man’s best friend.” Without them, it’s unlikely we’d be where we are today.

The few humans who have embodied our most sacred virtues of loyalty, courage, perseverance, unconditional love and devotion have gone down in history as heroes. There are few dogs who don’t demonstrate those virtues on a daily basis.

Just as a vegetarian might find cannibalism more disturbing than the more common practice of chowing down on a Big Mac, many in the West know the true nature of dogs as generations have welcomed them into their homes as pets and so find the torture, killing and eating of these animals as a kind of betrayal of our friends.

South Korea will be hosting the 2014 Asian Games. Because of this, we have an opportunity to put pressure on the government to work toward stopping the dog meat industry. Many organizations are calling for a boycott of these games until the South Korean government cracks down on the dog and cat meat trade. You can sign the petition promising to boycott the games here.

South Korea is not the only country where dog meat is consumed regularly. China’s industry annually slaughters up to 10 million dogs. But a few countries where the practice was once widespread have proven that it is possible to perpetuate a beautiful culture while culling practices that are not in step with modern values.

Taiwan, Hong Kong, the Phillipines and Thailand have all banned the dog meat industries and don’t seem to be suffering any adverse consequences.

But as long as we continue our own slaughter of billions of animals every bit as capable as a dog of experiencing love for their offspring, and suffering the terror and pain that inevitably comes with waiting in a line for death as those before them are killed, we have little leverage to convince those farmers who rallied late last month to legalize their choice of livestock that killing dogs for their meat is wrong.

“An ounce of practice is worth more than tons of preaching” – one of Gandhi’s top 10 fundamentals for changing the world.