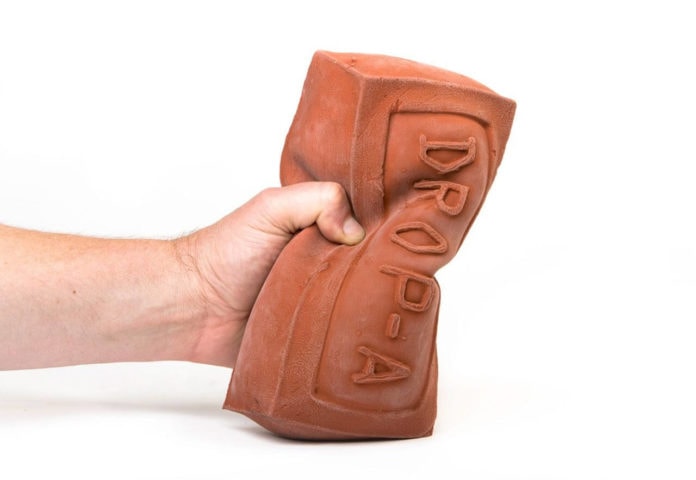 California’s massive drought has been raising lots of awareness about the importance of conserving water wherever possible, but unfortunately it hasn’t been enough to get more people to take action.

When a couple of entrepreneurs got together to discuss the problem, they noted that ‘dropping a brick’ inside of your toilet’s water tank is a well-known way to reduce your water usage on ever flush, but most people don’t do it. According to one of the founders, Greg Hadden,

“We got to laughing about the double entendre of dropping a brick in your toilet, and thought, this is actually a hilariously great idea for a campaign”

And thus was born the “Drop-A Brick” water saving campaign. Check out their promotional video below:

The ‘brick’ itself is made of rubber, due to the fact that an actual brick can cause problems with plumbing and clog pipes. This rubber brick, however, ships in a small envelope, and only swells once it’s been wet.

The device could save up to a half a gallon of water for every flush, which, if implemented on every toilet in California, could save 200 million gallons of water per day.

If you want to support the Drop-A Brick initiative, check out their IndieGoGo page and help the organization raise enough funds to provide free rubber bricks to communities in California like East Porterville, where they have actually run out of water and desperately need a solution.

$15 gets you your own Drop-A Brick (estimated to save a family of four 3,000 gallons per year), or offer $27 and you’ll get your own, but also be donating a brick to a Californian home in need of conserving some water.

Related:
HydroClean Fill Valve Helps You Save Water When You Flush

Energy saving tips that are perfect for shower time