Only in America would a television executive think a reality-based show on hunting endangered species would make for great TV.

They started their show off with a bang – literally – by shooting an elephant in the face – not once – but three times.

Hope the kids weren’t watching, as Dumbo was brutally hunted down and gruesomely shot for prime time.

What the devil was NBC Sports thinking when they “green lighted” the production?

Didn’t they think that collaborating with the American pro-gun lobby group, The National Rifle Association (NRA) – according to reports the person who shot the elephant was an NRA lobbyist – would be controversial enough?

If controversy was what they wanted, they got it. Shortly after clips of the shooting spread online, a petition circulated to pressure NBC to cancel the program. Initially, NBC Sports announced they weren’t going to cancel the show, just that specific episode, as they scrambled to have the video taken off the Internet. Eventually, the show was canned – and rightly so.

What boils my blood isn’t the pee-brained idea to create a reality television show on hunting endangered species. We all have wild flights of fancy, and you cannot judge a person by the random thoughts that pop in and out of existence.

However, taking action on that pee-brained idea is quite possibly – no scratch that – is the worst idea in television history.

At a time when most companies see the dollar value in being environmentally-friendly, with more “green” product lines, you’d have to be pretty out of touch with reality to create anything which goes smack in the face the other way.

Irwin, well known for speaking out for the protection and preservation of animals, used his fame to create a wildlife sanctuary where endangered animals could be protected.

NBC Sports was thankfully voted off the island with their latest hunting reality show, because they certainly weren’t interested in protecting and preserving endangered species – they wanted to just shot it up. 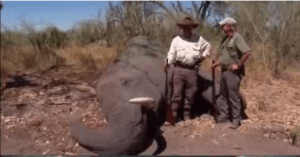 And of all the endangered species to go after, they chose the only one which we know of which actually suffers an emotional loss, much as we do when we lose a loved one.

Elephants are pack animals, much like dogs and wolves. Elephants travel in large packs, and form emotional bonds with others within their herd.

When a member of the heard dies, it affects the other elephants on a deeply emotional level.

This was evident in one of the finalists for the 2012 National Geographic Traveler Photo Contest, of an elephant standing guard over the body of her fallen friend – a victim of poachers. According to photographer John Chaney, the elephant stood for hours over her friend to pay her respects, chasing off birds and predators. The gut-wrenching moment when the elephant wraps her enormous trunk around her friend’s motionless trunk, in a final act of saying ‘good-bye’, was captured in the stunning picture.

There used to be an estimated three to five million African elephants on the planet, but those numbers have continued to fall, putting the mammoth-sized animals on the endangered species lists.

Wildlife groups claim over 35,000 elephants were killed in 2012, primarily for their ivory tusks and their skins by poachers.

And we now know of at least one elephant that was shot dead just for NBC Sports.
The fools.

Though it really shouldn’t surprise us, after all these are the very same people that gave us The Voice, where anyone can become an instant recording artist, and The Apprentice where famous business tycoon Donald Trump cleans his shop by telling people: “you’re fired.”

If they really want to have a reality television show that gets high ratings, they should show the inner workings of a television executive meeting.

They must be some wild and crazy people in those meetings, to come up with such pee-brained ideas such this one.

Now that would make for riveting television.