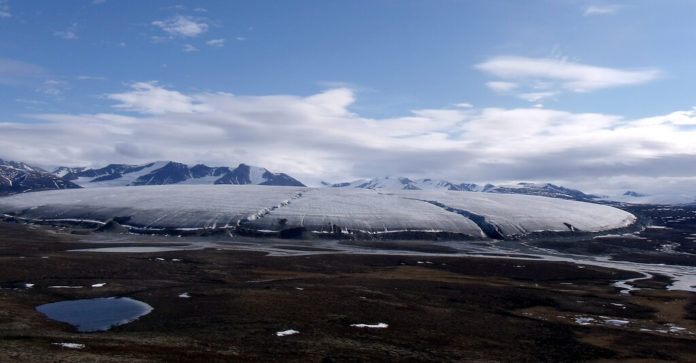 A fossilized forest that flourished more than 2.5 million years ago could return to life thanks to a warming planet, a team of scientists say.

Alexandre Guertin-Pasquier is with the University of Montreal. He is set to present the team’s research at the Canadian Paleontology Conference in Toronto this week.

MSNBC spoke to Guertin-Pasquier via email. He told the news outlet that of course the paleo-scene isn’t going to sprout back up over night. Rather, he said, climate forecasts suggest that, by 2100, the now-uninhabited Bylot Island where the fossilized forest was discovered will support temperatures similar to those prevalent when the forest thrived.

“The fossil forest found in Bylot Island probably looked like the ones actually found in the (present-day) south of Alaska, where tree-line boreal forest grows near some glacier margins,” Guertin-Pasquier wrote in an email. “The main plant diversity also seems to be similar between these two environments”, which both include willow, pine and spruce trees.

He and his colleagues reportedly analyzed samples of wood that had been preserved in the area’s peat and permafrost. They specifically looked for pollen, which would reveal the types of trees growing in the area at the time.

To help nail down a specific date when growth occurred, MSNBC reports that the researchers analyzed the sediments laid down at the time the forest lived. They specifically looked at magnetic particles found in the soil, particularly magnetite. This works because, throughout our planet’s history, the orientation of the magnetic north pole changed several times, a well-documented phenomenon. Since these “magnetic sediments” line up with Earth’s magnetic orientation, scientists can use this to date the sediment layers.

The team estimates that the forest thrived between 2.6 million and 3 million years ago.

The trees in the ancient forest, as interpreted from the pollen samples, usually grew in areas with a yearly average temperature of about 32 degrees Fahrenheit (0 degrees Celsius), Guertin-Pasquier said to MSNBC. Currently, average temperatures on Bylot Island hover around 5 degrees F (minus-15 degrees C), he added.

MSNBC quotes an email that Larisa R.G. DeSantis wrote to Live Science: “I think it’s very possible we might see forest compositions of the past returning with warming. The question is whether those trees will be able to make it up there,” adding that in some ways it’s a lot easier for animals to migrate to different conditions.

“But trees have another whole level of difficulty. Their potential for movement is based on their dispersal of seeds and that sort of thing, so their movement is constrained,” said DeSantis. She studies, among other topics, the reconstruction of ancient environments at Vanderbilt University in Nashville, Tenn.

Next, the researchers reportedly plan to look more closely at other plant remains from Bylot Island. The team is looking to get a better idea of the possibly diverse flora there.