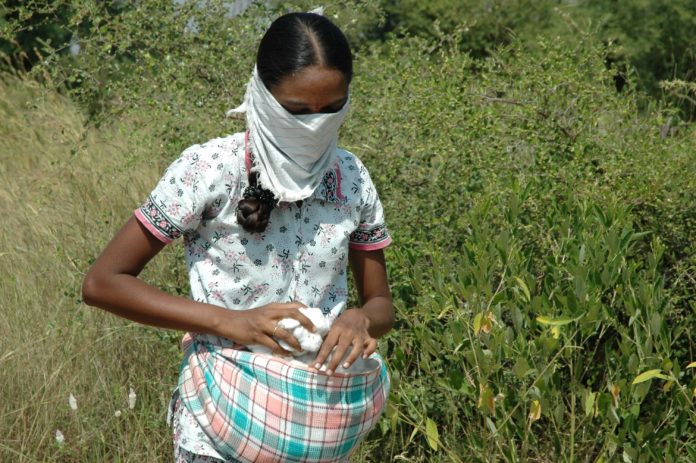 Cotton is everywhere.  We use cotton fibers to make clothing, bed sheets, curtains, car seats, pillows, and much, much more.  It is one of the United States’ largest exports, as it ships between 40% and 60% of its crop annually.  More than 50% of the world’s cotton comes from the United States.  And an additional 85 countries grow the crop as well, with 55 of those exporting.  Clearly, cotton has quite a presence in the world.  But that’s not necessarily a good thing.

Cotton, in spite of its global prevalence, actually causes quite a few problems, all of which affect the entire world.  Cotton uses an enormous amount of water, causes soil erosion and degradation, and uses more insecticides and pesticides than almost any other crop.

Cotton requires a significant amount of water to grow.  Some statistics say that in order to grow enough cotton to produce a single cotton t-shirt, the same amount of water is required as a single person drinks over a period of three years.  This is noteworthy, especially with regard to the immense amount of cotton grown worldwide.  That amounts to an incredible amount of water used to grow just one simple crop, and one that is not even a source of food.

Another serious problem with cotton is its effects on the soil.  Because cotton requires so much water to grow, this causes problems with the soil in which it grows.  Obviously not all irrigated water that is used to grow cotton actually reaches the roots.  Instead, plenty of the water becomes runoff, which is where things become problematic.  Because irrigation generally doesn’t use pure hydrogen and oxygen, there are quite a few impurities in the water, one of which is salt.  When too much salt enters soil, the soil is eventually rendered unusable, and it is known as the salinization of the soil.  After not too many years, soil that has grown cotton eventually becomes a wasteland, farmland that lies fallow.  This has resulted in the destruction of farmland in many countries, and in some, such as Uzbekistan, more than half of the farmland in the entire country is now useless.  This is yet another problem with cotton.

These are just a few of the environmental problems with cotton.  Although overuse of water, soil degradation, and toxicity are certainly serious consequences of the growing of cotton, we haven’t even addressed the economic problems that have been caused by cotton in recent years, in which the market was oversaturated and the demand for cotton was low – which drove many farmers to ruin, sadly.  Ultimately, cotton is quite a villain, and now is the time to look to other sources where possible to replace cotton fibers.  One promising alternative has been that of bamboo, which has come into the world market in recent years as a potential replacement for cotton.  Bamboo fibers can be used to create both fabric and lumber, and the bamboo fabrics are quite a bit softer than those of cotton to boot. We as consumers need to make the decision buy items like bamboo sheets, bamboo clothing, even bamboo bicycles, all of which are becoming increasingly popular because of their negative carbon footprints.  To learn more about bamboo as a resource, go here.

Related:
The Top 5 Green Materials for Home Improvement and Decoration

Water consumption, soil degradation, toxicity, and economics – these are just a few of the problems with cotton.  Let’s find an alternative before it’s too late.