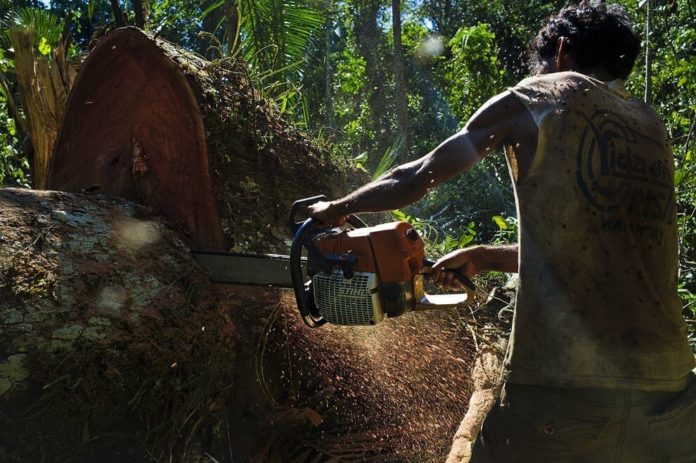 For the past 10 years, Chota (54) who was the president of the Ashéninka indigenous settlement of Saweto, a 275-square-mile (712-square-kilometer) headwaters region in the upper reaches of the Alto Tamaya River, rallied and protested against the violations that he saw happening to his people’s land and its forests.

He rallied against drug traffickers who would use the porous border on his land to transport coca paste into Brazil and criminal timber syndicates that have been operating across Peru’s borders with little to no restraint.

Despite the obvious dangers of confronting these people, Chota remained adamant.

Chota’s efforts were far from selfish: They were for the good of his community. On their land they hoped to create one day create an ecological reserve for the their people to live sustainably on, using only the bounty of their land, the forest and the lake as their home and sustenance.

No Title, No Rights

But what Chota was doing was indeed dangerous, and the danger, according to National Geographic reporter Scott Wallace, was very real. Three years previously, Chota had remarked to Scott:

“Welcome to the land without law. The only law here is the law of the gun.”

Chota is referring to his battle with the Ucayali regional government in Pucallpa to gain legal title for his people’s land for the last 10 years. The ongoing petitioning with little or no response, has meant that Chota’s attempts to remove illegal loggers and drug traffickers were made that much more difficult.

Chota remarked that even though “they threaten us, they intimidate, they have the guns” he was still determined that he had to confront the logging crews that came upriver from Pucallpa to cut limber illegally within the borders of Saweto’s land, a land that Chota and his people had no legal title to:

“As long as we don’t have title, the loggers don’t respect native ownership,”

Last year, Chota successfully helped police locate a sawmill outside Pucallpa on the banks of Ucayali River, where they found piles of raw timber that had been illegally harvested from Saweto.

After the timber was impounded, powerful logging bosses threatened that “someone from Saweto is going to die”.

But while he pleaded with the government for more security, those please fell on deaf ears.

The Four Bodies Have Yet To Been Recovered

To make the whole situation worse, the bodies of the four murdered activists have yet to been recovered.

The widows have pleaded with the Peruvian government to retrieve the bodies and provide more security for the remaining community,but again, their voices have fallen on deaf ears.

“We want the bodies of our husbands that have been left out in the jungle as though they were animals,” says Ergilia López, the widow of murdered community treasurer Jorge Ríos Pérez.

Frustrated with Peru’s slow response to recover the bodies, the Ashéninkas’ Brazilian relatives from Apiwtxa sent their own team of 16 tribal members down. The team arrived at the scene or the murders two days ago, finding only the body of Jorge Ríos, who had been shot in the base of the neck, and nothing but the belongings of the others.

Related:   Canada’s Role at COP16: an Exclusive Interview with John Baird, Minister of the Environment

They’re believed to have been washed away by heavy rain.