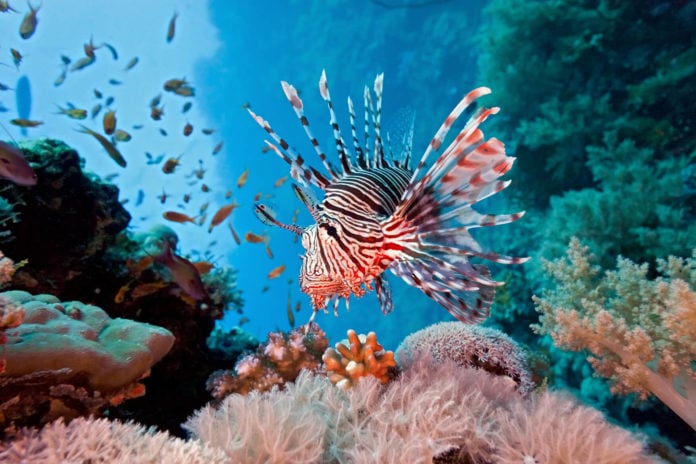 Coral reefs are some of the most treasured habitats of the ocean. Acting as nurseries and homes for a diverse mix of aquatic animals, they are bustling centres of oceanic life. Unfortunately, strong and formidable as they are for fish, coral reefs are one of the most sensitive of the ocean’s ecosystems; rising temperatures, pollution from agricultural run-off, and tourism exploitation are all having a profoundly negative impact on coral reefs. What’s worse is that, because we have yet to curtail our unsustainable habits, the destruction of the world’s precious few reefs is increasing at an ever-increasing rate.

Caribbean coral reefs present themselves as both one of the most visited and one of the most endangered of earth’s reefs. In fact, despite being main tourist destinations for many Caribbean islands, the reefs are still facing imminent destruction; with only 8% live coral reef remaining, much of the reef ecosystem faces total collapse. I say “much” rather than “all” because a few sparse and isolated areas of the Caribbean — such as the Cayman Islands and the Netherlands Antilles — are showing limited signs of survival. However optimistic the future may be for these small populations, it stands to be said: the majority of the Caribbean’s reefs are facing insurmountable ecological damage. Notably, the struggling 8% we have today is a far cry from the 50% coral cover in the 1970s, with the rate of destruction showing no sign of stopping. The rapidity of this decline has scientists clamouring for a change in tourist and environmental policies in order to salvage the reef.

While the Caribbean might be in the spotlight due to the severity of its situation, it isn’t the only reef that’s in danger. Scientists at the International Union for the Conservation of Nature are concerned that reefs worldwide are about to face collapse by as soon as 2050. In fact, just last year scientists have warned that 95% of reefs in the south-Pacific will soon be in the endangered zone, with many of them facing the same ecological problems as the Caribbean’s. Considering how important reefs are in fostering aquatic life, the quality of these reefs speaks loudly about the quality of our oceans.

With so many scientists warning of habitat destruction in aquatic ecosystems all over the world, it seems that the ocean itself is in danger of collapse. While it’s massive enough to take a lot of abuse — the oil spills, the overfishing, the rising acidity, and more — it seems that even the vast and mighty sea itself has its limits. Even if we manage to weather the energy crisis and the unsustainable development present in our cities and our farms, it seems a hollow victory if we’re too late to save the ocean, especially considering how many lives (human and animal) are tied to this watery world. In order to truly save this planet, we can’t just focus on what’s happening on land; we have to also include the sea.