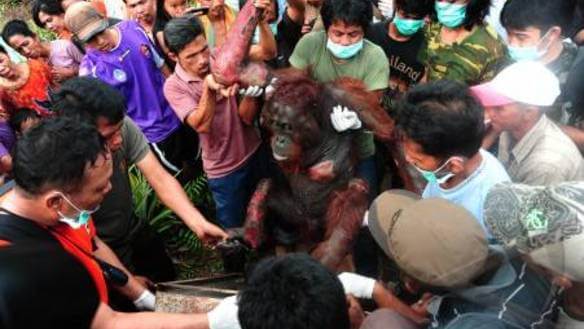 After his forest home was destroyed to make room for palm fruit oil plantations in West Borneo, the charred primate pictured above dared to abate his starvation by feeding on the fruit of the trees that replaced his former lush peat jungle.

In an attempt to smoke the animal out of the palm tree it had taken refuge in, villagers accidentally set the entire tree and the orangutan on fire. He plummeted out of the tree and into the care of International Animal Rescue (IAR). 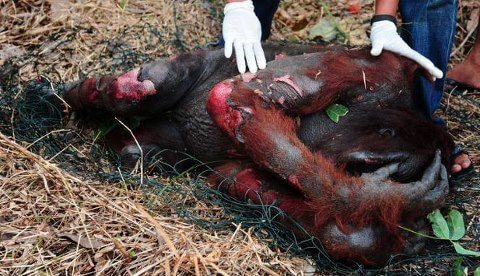 Although originally expected to make a full recovery, IAR reported that the orangutan succumbed to his burns and overall malnourished state when he died last week.

While this specific incident is immensely tragic taken on its own, the orangutan species as a whole is under serious threat in large part because of the world’s demand for cheap palm fruit oil which is fueling the clear cutting and burning of Indonesia’s once-vast rain forests to establish palm plantations.

Orangutans can only be found naturally on the islands of Sumatra and Borneo and are divided into two species based on which island they live. Both species are listed on the IUCN Red List of the most endangered species in the world. The Bornean orangutan is listed as “endangered,” and its Sumatran cousins bear the burden of being listed as “critically endangered,” and in immediate threat of extinction.

Estimates put the Borneo great apes at numbering about 54,000, and the Sumatran at about 6,600, giving orangutans a spot as one of the World’s Top 25 Most Endangered Primates, according to the Sumatran Orangutan Conservation Programme.

These close human relatives are arguably the most intelligent of our ape cousins and use tools better than any other non-human primate. As they attempt to live out their lives in the same way they’ve been doing for millennia, their forest homes are being destroyed at a rate of about three football fields every day.

Just in the last 20 years, half of Indonesia’s rain forest has been obliterated, and, as Leila Salazar-Lopez of the Rainforest Action Network (RAN) told Voices for our Planet, the government has announced plans to convert an area of virgin forest about the size of Missouri into palm plantations by 2020.

This mass destruction is taking the lives of about 50 orangutans per week, Zoos Victoria in Australia estimates. And demand for palm oil just keeps increasing. According to RAN, “demand for the oil surged by an average of 2.2 million metric tons worldwide each year between 2000 and 2009.”

While conservationists are projecting that we may see the extinction of these beautiful, long-red-haired apes in the next few decades, it doesn’t take a scientist to do the math. As long as we keep buying products containing palm fruit oil, orangutans will continue to be treated as agricultural pests and subjected to being burned alive in their own homes, shot as they forage for food, imprisoned for the exotic pet trade and tortured in captivity to do tricks for tourists.

Palm oil has become popular with industries from cosmetics to processed food to biodiesel because it is the cheapest of the vegetable oils to manufacture. And it is in everything. A quick scan of all of my favorite green products broke my heart. I was just as responsible for the burning of that orangutan as any of the villagers that set the fire.

Related:
Fireflies and Fairies: Magical Natural Creatures that Give Us Light

A quick call the Earth Balance revealed that it sources most of its palm oil from Roundtable on Sustainable Palm Oil (RSPO) members. While this is a step above the majority of companies, is still does nothing to guarantee that orangutans are not being harassed or even killed.

The RSPO was created by NGOs and palm oil stakeholders in an effort to create a way for palm oil to be grown sustainably. The process is not perfect as there are few advantages to being certified.  But if more consumers begin demanding that companies source only RSPO certified palm oil, the system would advance.

One of the biggest challenges for consumers is the lack of appropriate labeling for palm oil. Found in more than 60 percent of manufactured goods, it can be listed under more than 200 different names.

The sodium lauryl sulfate in my Seventh Generation laundry detergent is most likely palm-oil sourced (they did not return my call for more information). It can be listed simply as “vegetable oil,” or other common ingredients that come at the price of Indonesia’s and Malaysia’s rain forests and their inhabitants (and all of us for that matter) are cetyl alcohol, linoleic acid or octyl palmitate. Check out this complete list.

The destruction of these forests has made Indonesia the largest emitter of carbon dioxide after the United States and China as the reckless clearing of peat swamp forests releases huge amounts of the gas while leaving a trail of species at risk for extinction like our close relative the orangutan and the mysterious Sumatran tiger, rhino and elephant.

Related:
‘Hypocritical’ Treatment Towards Animals: Anonymous for the Voiceless Share Shocking Comparisons Made by Activist.

This is the BBC’s coverage of the orangutan burning.