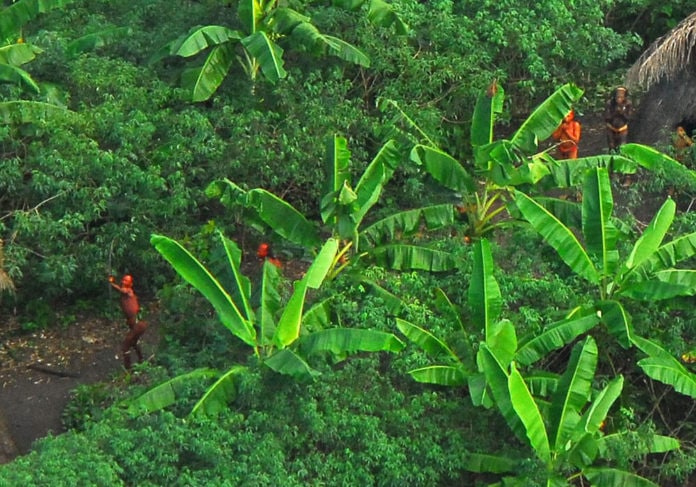 Oil exploration is threatening two of the world’s last uncontacted tribes deep in the heart of the Amazon forest, according to conservationists.

The Guardian reports that the Tagaeri and the Taramenane, who have fought off illegal loggers and Catholic missionaries with spears and blowpipes to maintain their isolated, nomadic existence – are now at risk from the construction of roads and drilling wells as petroleum firms carve up the Yasuni national park.

Many scientists believe Yasuni is the most biodiverse place on Earth. Conservationists say swaths of the park remain in pristine condition thanks partly to the ferocity of the indigenous people’s resistance to intruders.

But The Guardian reports that that is changing:

“Although the rights of these tribes are recognised by the country’s constitution, their existence has been largely ignored by government authorities responsible for drawing up the boundaries for development, say researchers who have studied their interaction with often-violent and lawless frontiers of globalisation.”

The Taromenane are known locally as the “red feet”. They are thought to be offshoots of the Huaorani. They were almost entirely carnivorous nomads and fearsome defenders of their rainforest home. They resisted contact until 1958. But reports show the Huaorani are now mostly settled, often around oil well communities with whom they have a parasitic relationship.

The Guardian quotes Carlos Andrés Vera, the director of a documentary about the uncontacted tribes, who says the Huaorani take money from the petroleum companies in return for a promise not to attack: “They may do a show and dance naked, but it’s basically extortion. I don’t blame them. The Huaorani have learned about citizenship from Ecuador’s mafia: the army, oil firms and illegal loggers.”

Related:
The Pros and Cons of Canadian Oil Wells

The Huaorani and uncontacted tribes have also reportedly lost much of their territory to other tribes that were quicker to embrace modernity and strike land deals with the authorities. The newspaper notes that the Kichwa indigenous group have moved from spears and blowpipes to guns and eco-tourism within three generations. They say the other tribes chose isolation.

“We call them savages,” Silvana Tangoy, a Kichwa guide who performs traditional dances for visiting tourists, told The Guardian. “We tried to get in touch with them, but they responded with spears so we leave them now. That’s fine. They can do what they want in the park. They don’t want to be civilised.”

Oil exploration is just one issue these uncontacted tribes face. But observers say the issues are compounded by political sensitivities and the polarisation of opinion between those who call them violent savages and want to seize their land and those who feel they are vulnerable and can do no wrong.