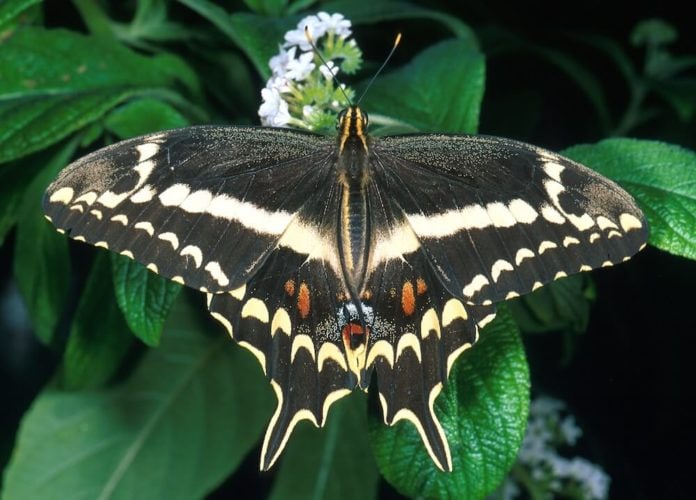 This summer could very well be the last for Florida’s Schaus swallowtail butterfly. Once an abundant member of South Florida’s wilderness, the species was hard-hit to the point of extinction due to insecticide and urban development. While it was deemed to be stable in 2008 after several recovery attempts, recent findings have concluded otherwise. Finding only four butterflies in total during the peak spring butterfly season, the Schaus swallowtail was given an emergency captive breeding program that started on June 8. But it was already too late; by the time wildlife biologists started their search for specimens, there were none to be found.

Thomas Emmel, a retired University of Florida professor who has spent the better part of two decades trying to save the Schaus swallowtail, is disheartened by the news. The only hope left for the survival of the species is in any pupal survivors – since part of the swallowtail’s lifecycle involves a hidden pupal stage, it is possible that there are some still hiding in the native underbrush. However, even that is simply chasing a fleeting hope. It’s quite likely that this season was the Schaus’s last.

The loss of the charismatic swallowtail is in itself an ecological hit. Once flitting through South Florida’s fields by the hundreds, the hand-sized Schaus was a major pollen distributor. However, some are raising more than ecological concerns for its sudden disappearance. Tens of thousands of dollars were spent funding multiple rescue projects in order to resuscitate its population numbers – all in vain, now that the butterfly is presumed extinct. The question thus appears: just how responsible are we in trying to save these endangered species, and is it worth our public tax dollars for these efforts?

Related:   Should the UK kill grey squirrels to save the endangered reds?

Professor Emmel’s efforts are markedly different from charity-funded NGOs such as the World Wildlife Federation. His projects are funded by the US Fish and Wildlife Service (FWS), thus making his conservation efforts a public effort. In fact, the FWS has admitted to spending north of 1.5 billion dollars in conservation efforts for many endangered species and habitat restoration projects. With more than 1,200 animals and 750 plants on the endangered species list in North America alone, are we truly obligated to saving all of them?

The moral answer to this question is, of course, a resounding yes. We have a responsibility to keep our ecosystems in check, especially when such deaths can be prevented by a little bit of human effort. We also have a responsibility for earth’s future inheritors – they deserve to see these beautiful creatures just as much as we do. And yet, our actual response falls flat of such high expectations! After all, our habits are still unsustainable and our species are still dying.

We fuss about wasting tax dollars on ‘wasted’ wildlife rescue projects when such failures are to be expected from our unsustainable civilization. If we want our conservation efforts meaningful, we must stop seeing them as separate from our everyday lives, as high and lofty projects done by wildlife biologists and university researchers. We too can help. If we want them to be effective, we must do more than give the government our tax money – we must also do our part to encourage a sustainable planet where no species should be endangered from our actions.