It’s no secret that the world’s reefs are at risk courtesy of overfishing, pollution, rising sea temperatures and ocean acidification. In fact, the reefs, which habitat a quarter of marine wildlife, have seen a steady decline in the past decades–scientists have estimated that 75 to 85 percent of the coral in the Caribbean has been lost over the past 35 years and the Great Barrier Reef off Australia has had a 50 percent decline in the last 50 years.

What’s more, a recently published scientific paper (published in the journal Science) found that rate at which the ocean is acidifying is faster now than it has ever been in the last 300 million years. Ocean acidification is a phenomenon related to rising carbon dioxide levels in the atmosphere that make it difficult for creatures to build their shells and skeletons.

Oceans teem with microscopic organisms that are constantly drifting down towards the sea bed, attaching to and colonising on the way any hard secure surface, such as rock outcrops, and thereby creating the basis of a natural reef. Coral reefs attract an array of marine life (such as colourful fish, turtles, sea urchins, sponges, and sharks) and also provide enclosed spaces for sea creatures to breed or take refuge. 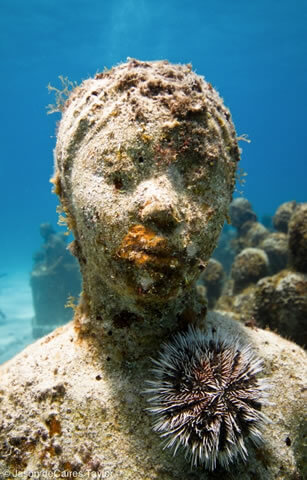 Only about 10 – 15% of the sea bed has a solid enough substratum to allow reefs to form naturally. In order to increase the number of reefs in these areas artificial reefs have recently been created from materials that are durable, secure and environmentally sensitive. These reefs appear to have been successful in that they have attracted coral growth which, in turn, can support an entire marine ecosystem.

One of the greatest benefits of artificial reefs is that they have lifted the pressure off natural reefs which, over the past few decades, have been over-fished and over-visited. By diverting attention to artificial reefs, natural reefs have now been given a greater chance to repair and to regenerate.

If you’re wondering if Taylor’s art work can really make a difference, then consider this: According to NPR, Taylor’s 2006 underwater sculpture park at the Caribbean island of Grenada now has sea creatures latching on to it.

NPR explains the uniqueness of what has been created when art meets conservation:

But the sly part of all this is what the sculptures do for the coral. By pulling visitors away from the natural coral to the new, adjacent “parks,” there is less human pressure at the original, fragile sites. And later as the statues get covered over, they may become hosts to the next generation of coral reefs. Sounds like it might work, unless the parks double the crowds, but the game is on.

And Taylor’s work is not only in Grenada. Last year Taylor created a significantly larger underwater sculpture park off Isla Mujeres in Mexico of hundreds of life-size human statues. The instillation, called The Silent Evolution, hosts over 400 statues. Taylor told USA Today: “I have a whole team of underwater helpers that come along and do all the finishing for me. The coral applies the paint. The fish supply the atmosphere. The water provides the mood. People ask me when it’s going to be finished. This is just the beginning.”