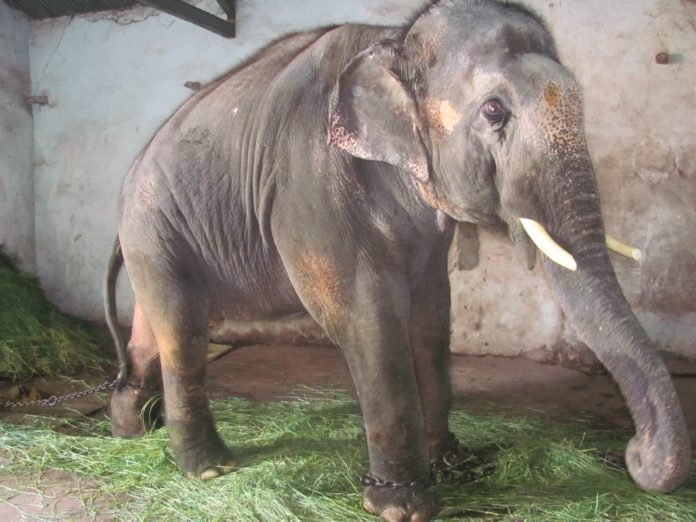 The life of Sunder the elephant gained worldwide attention earlier this month, after his tragic existence in India was revealed to the public. The 13-year-old elephant had been kept chained in the dark for seven years at an Indian temple, at the hands of an abusive handler.

But officials announced Sunder will be rescued from his shed hell in India’s Maharashtra district. He will be moved to a wildlife centre near Bangalore.

The elephant got a boost from a couple of celebrities, who pleaded with Indian officials for the animal’s release. Beatles legend Sir Paul McCartney and actress Pamela Anderson rallied India’s forest minister Dr. Patangrao Kadam for Sunder’s freedom.

According to The Sun newspaper, the 70-year-old had written: “I have seen photographs of young Sunder, the elephant kept alone in a shed at a temple and put in chains with spikes. Years of his life have been ruined by keeping him and abusing him in this way. Enough is enough. Get Sunder out.”

Animal rights group, PETA, has publicly thanked Kadam for his kindnessr. A PETA spokesperson says, “The difference between Sunder’s cruel life in chains at the temple and his new journey to freedom, love and care is like night and day. We are grateful to the Forest Minister for agreeing to liberate Sunder and let him enjoy things that are natural and important to him for the first time in his life.”

Observers say the abuse of Sunder highlights a growing scandal in India — over the way elephants are used in Indian temples to represent the Hindu god Ganesha. Reports say these animals are often mistreated, and frequently controlled through beating. The elephants are also prodded and gouged in sensitive areas behind their knees and ears. They often wilt away without veterinary care and are fed unsuitable food.