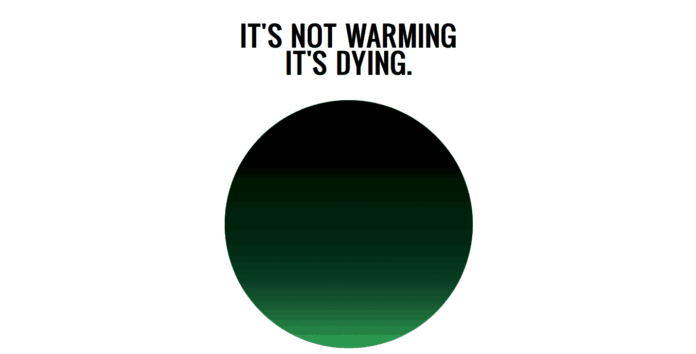 Even though you’ve probably never heard of Milton Glaser, you’re definitely familiar with his work – most notably, I♥NY.

Now, Glaser is turning his design skills and notoriety to raise awareness about the issues facing our environment, and the first step is to give “global warming” a new look with a new connotation. The result is the above logo and tagline, “It’s Not Warming, It’s Dying”.

“There is no more significant issue on earth than its survival. The questions is, how can anyone not be involved?” – Milton Glaser

The logo shows a black smoke pushing out the small remaining bit of green, representing the life on the planet. On the buttons being printed, the green ink is glow-in-the-dark. Of the design, Glaser said, “symbolically, the disappearance of light seemed to be an appropriate way to begin.”

In order to spread the “It’s Not Warming” campaign, Glaser launched itsnotwarming.com where you can buy 5 ‘Dying Earth’ buttons for $5, hoping that you’ll wear one and give four out to your friends, with all proceeds going to distributing more buttons.

Those behind the campaign hope that the button-wearers will share photos of themselves wearing them with the hashtag #itsnotwarming.

In an interview with dezeen magazine, Glaser said

“Those of us responsible for communicating ideas to others must bear the burden of the consequences of such communication… If one is looking for a purpose and theme to their life, avoiding the worst event in human history is a good place to begin… I hope people will respond by acknowledging what is real.”

Visit itsnotwarming.com today to order your own set of buttons and help spread the word that the planet isn’t warming – it’s dying.