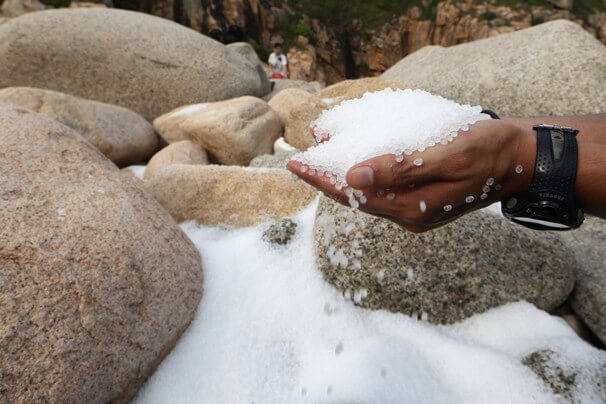 A Chinese petrochemical plant has a big spill on its hands. And it’s not the type of spill you might suspect…

In its first media appearance since the 17-day old disaster, Sinopec has promised to help clean up a spill of tiny plastic pellets in Hong Kong waters. The particles have washed onto many beaches and are now starting to kill off the fish.

Sinopec executives say the cargo belonged to the company. And that it’s set aside HK$10m (US 1.28m) for clean-up efforts. The company also promised to spend more money if necessary.

The six containers fell off a freighter on July 23 during Hong Kong’s worst typhoon in 13 years. The containers spilled 150-tonnes of pellets into the sea. One container is still missing.
The Hong Kong government has assured citizens that the white, polypropylene beads are static and non-toxic. But environmentalists say they can absorb pollutants and poison the food chain.

Meanwhile, volunteers are on Hong Kong’s beaches trying to clear up the beads, which are used to make plastic. But only a fraction of them has been collected so far.

Sinopec announced it would dispatch industrial vacuum cleaners to quicken the clean-up.

Hong Kong’s top civil servant is chief secretary Carrie Lam. She has said the government will launch an investigation and bring to justice those responsible.