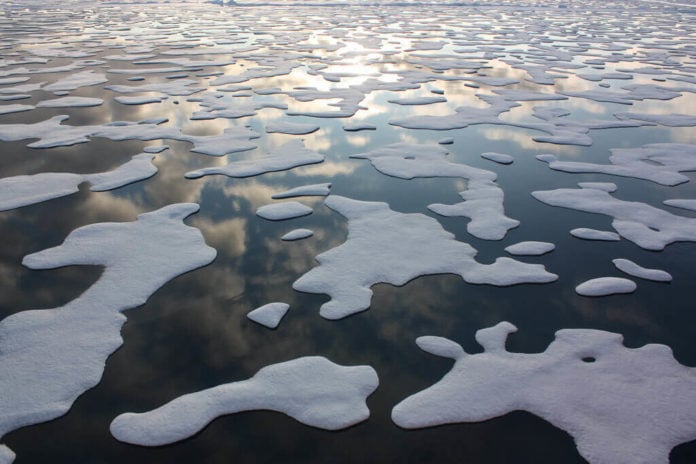 The ice in the arctic has been reducing at a rapid pace since the 1990s leading scientists to speculate that the Arctic may eventually become ice-free during the summers as early as the late 2020s. The loss of Arctic ice will undoubtedly have a negative effect on wildlife. There’s no denying that one of the reasons the arctic is melting is global warming. And if you’ve ever wondered exactly how much of the melting can be blamed on global warming, wonder no more!

According to a new study, led by climate scientist Jonny Day at the National Centre for Atmospheric Science at the University of Reading, the loss of arctic sea ice is, at the very least, 70 percent man-made. And that’s just the low ball estimate–the study shares that climate change could be up to 95 percent due to human-induced climate change! This research, published online in the journal Environmental Research Letters, stands apart from previous research which only attribute half the loss to man-made climate change and the other half to nature taking its course.

Day told The Guardian about his inspiration and goal with this study:

“Since the 1970s, there’s been a 40% decrease in the summer sea ice extent. We were trying to determine how much of this was due to natural variability and therefore imply what aspect is due to man-made climate change as well.”

In order actually determine the role humans had played in climate chance and the loss of arctic sea ice, Day used computer simulations to see how the Arctic might have varied without greenhouse gases created by mankind. He found that a climate system known as the Atlantic multi-decadal oscillation (AMO), which is responsible for a cycle of warming and cooling that repeats itself every 65 to 80 years, was in a warming phase since the mid 1970s. Day found that they “could only attribute as much as 30% [of the Arctic ice loss] to the AMO” which, in turn, suggests that “the rest is due to something else, and this is most likely going to be man-made global change.” He also points out that the 30 percent quantitative measure is an upper limit estimate and that AMO could be responsible for as little as 5 percent of Arctic ice loss, making the loss up to 95 percent man-made.

So what’s the big deal? Day warns that feedback effects could facilitate more Arctic ice loss in the years to come as the Earth becomes warmer. Specifically, Day forewarns about the ice-albedo feedback–a vicious climate process that reinforces ice melting. The ice-albedo feedback happens like this: When ice melts it creates more ocean water making more water readily available to absorb more radiation; the radiation will continue warming the water, and in turn, the warm water would then keep on melting the ice.