“When I throw an object out, it still has a life, and it now activates this complex network of protocols and systems and controversies. But because we don’t have an awareness of this, it’s much easier to just let it go.

In the case of, say, water bottles, what if a company that markets water in these plastic bottles was responsible for the end use of those bottles, after the water is gone. People are throwing them out their car windows, or letting them fall on the street, or putting them in our rivers and lakes. But the company would have to go and get all that stuff, and it would be a strong incentive to come up with an alternative, something that maybe isn’t a plastic water bottle.

[We are] [unaware], the people at large. This is quite a heartbreak: People want to do the right thing. So do you tell them, recycle your water bottle and you will save the planet? No. If you recycle your water bottle, you have taken a very important first step, but that’s all it is. Then the question is, what are the next steps? How do we prevent this bottle from coming into being in the first place?”

Every day, each one of us propels something towards its destiny at a landfill – a snack wrapper, a coffee cup, a Q-tip, a tissue.

From the Philippines to the Pacific Rim, we are loaded up with discarded plastic and rusting dryers left growing either mold or coral ‘til beyond our time; it is society at large perhaps failing to grasp the life and life path of garbage, author Robin Nagle notes.

Nagle’s recent book, “Picking Up”, chronicles her decade spent working with the NYC Department of Sanitation in their offices, employee hangouts and collection trucks. Her personal history intertwines with industry inside, giving light to a complex, difficult story of humans’ relationship with the trash cycle. As Nagle points out, “we live in cities literally built on trash, yet the management of household waste remains one of the most invisible aspects of modern existence.” (Collector’s Weekly)

The U.S. is the most wasteful nation in the world, generating about 4.40 pounds of trash per person per day or 250 million tons across the country within a year. In 2011, only about a 34.7% recycling rate was maintained, according to the EPA.

Robin’s chronicles of the inside stinky story on America’s trash were featured on Collector’s Weekly providing shots from parts of her project capturing NYC’s waste realities from around the turn of the century. Her photos show pre-cleaned New York City, which itself generates nearly 22 million pounds of household waste every day, as streets marred with dirt, trash and the occasional animal shell.

Collector’s details a pretty interesting history of sanitation services in America and of their “dapper” founding father, George Waring. When his weird crew of marketing mavens -dubbed the “White Wings”- first began cleaning up New York streets in the 1890s, they needed police escorts to protect them from disgruntled residents who opposed the street sweeps. (Their opposition was obviously short-lived once people caught wind of the difference, and it wasn’t long before the WW became resident heroes for instilling this measure of public sanitation).

Related:
10 Reasons why you’ll be buried alive by trash – Infographic

An excerpt from the interview:

Collectors Weekly: It’s interesting that sanitation was so publicly recognized, whereas today, the visibility of waste removal has greatly diminished.

Nagle: The department of sanitation started out in the public eye because it was such a remarkable difference: The before and after was stark. We’re now very used to a certain presence and level of competence and waste management being very well done. One of the privileges of modern life is that we get to ignore it. Therefore, it’s almost like the department is a victim of its own success.

The entire project is made invisible, and you only notice it in the gap, in the absence. For example, if there’s a missed pickup or, like in 1968, when there was a strike. Then you see it. But when they’re out there every day, maintaining the illusion that there’s an “away” to which we can throw things, then it’s all sort of magic. It just goes “away.” 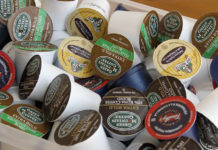