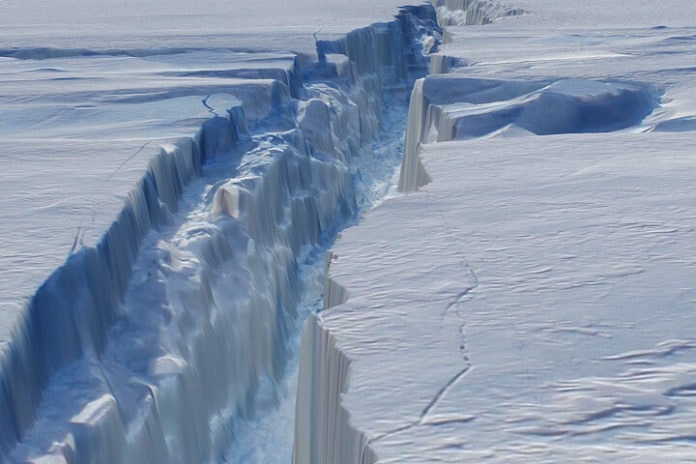 Antarctica’s Pine Island Glacier has calved, forming a new iceberg that is 277 square miles in size and is almost as big as New York City. Scientists have predicted the glacier to split since October 2011. Iceberg formation like this is natural, but often it is caused by global warming and climate change.

And this isn’t the first time something like this happened, as last year the Petermann Glacier in Greenland has had a long crack in the northern tip and NASA satellites confirmed that an iceberg more than double the size of Manhattan, measuring 59-square-mile (150 square kilometers), has broken off.  The break took place in the portion of the ice sheet that covered water instead of land. This wasn’t the first time the Petermann Glacier has broken off: Two years ago the glacier had an iceberg twice the size of the recent one break off.

University of Delaware professor Andreas Muenchow, who was one of the first researchers to notice the break, told The Wall Street Journal:

“It’s dramatic. It’s disturbing. We have data for 150 years and we see changes that we have not seen before. It’s one of the manifestations that Greenland is changing very fast.”

While researchers believe global warming is the culprit here, they have yet to conclusively prove it. The fact remains that glaciers, naturally, spawn icebergs. That being said, the rate at which the Petermann has been calving icebergs is unprecedented and thus, is deemed unnatural. It’s more than Greeland’s Petermann Glacier that has been seeing unusual activity as many of Greenland’s southern glaciers have been melting at a rapid rate.

What are the side effects of such change? While the glacier breaks don’t add to global sea levels, the more of the Petermann that is lost, the more melting will occur and thereby, the melting would push sea levels higher. According to Our Amazing Planet, “Polar research has revealed that ice shelves act as giant floating doorstops for the glaciers that feed them; when ice shelves disappear, the glaciers that push against them speed up, reach the sea more quickly and thus melt faster.”

And melting isn’t a far stretch from reality as scientists have found that Northern Greenland and Canada have been warming five times faster than the average global temperature–according to NASA average temperatures have increased by about 4 degrees Fahrenheit in the last 30 years. In fact, scientists also reported this week that the Arctic had the largest sea ice loss on record for June. Why? Perhaps it had something to do with the fact that June 2012 had the highest land and ocean average surface temperatures in the northern hemisphere in recorded history.

“While the size is not as spectacular as it was in 2010, the fact that it follows so closely to the 2010 event brings the glacier’s terminus to a location where it has not been for at least 150 years. Northwest Greenland and northeast Canada are warming more than five times faster than the rest of the world, but the observed warming is not proof that the diminishing ice shelf is caused by this, because air temperatures have little effect on this glacier; ocean temperatures do, and our ocean temperature time series are only five to eight years long — too short to establish a robust warming signal.”