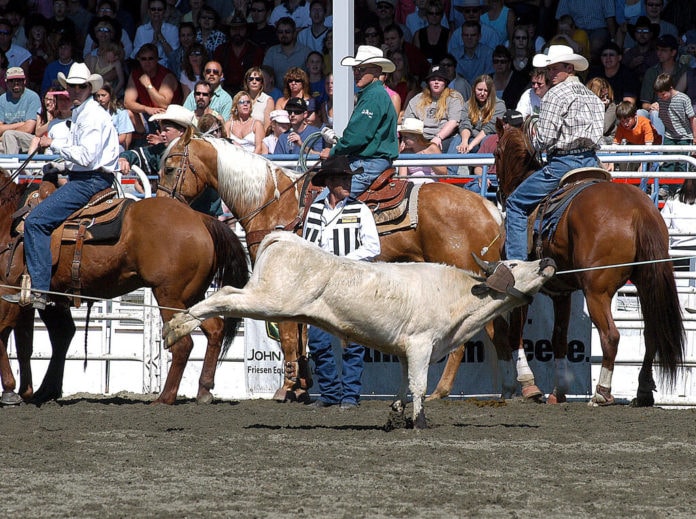 Okay. I don’t want to sell it short. More than one million people flocked to Calgary, Canada, in an attempt to re-live romantic notions of the “old west.” But like Buffalo Bill’s Wild West show, the Calgary Stampede is a glorified spectacle of a time when the true wild beauty of the West was being stolen from Native Americans and regurgitated into land more suitable for livestock and Europeans.

The seriously abusive events that people actually sit and enjoy include, of course, the calf roping, where a 3-month-old calf is taken from its mother, poked and prodded while caged in front of thousands of jeering spectators so that it jolts out of the chute at 27 miles an hour, roped by its neck and jerked to a complete stop, thrown to the ground and tied, all in the name of some good-old-fashioned, harmless fun. 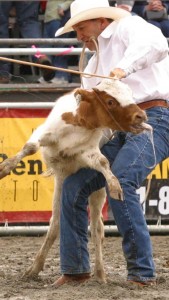 But my gran-daddy’s been ropin’ cattle since we killed all the wild animals off this land a hundred years ago so if you don’t like it, leave. Really. I get that a lot. But the funny thing is people got really upset when I stole a few kids from their mothers to use as house slaves, even though my great-great gran-daddy helped make this country what it is today doing the same thing. Weird, right?

But baby cows aren’t the only ones who suffer in the name of entertaining the ruling class. The chuckwagon event pits teams of horses pulling wagons against each other in a terrifying dash for the finish line.

More than 50 horses have died in the event since 1986, and three died this year, to the giddy horror of the spectators. Real cowboys didn’t race chuckwagons, and they’d most likely find our modern attempt to manufacture the true dangers they were forced to face every day pretty pathetic.

Old-school cowboys never felt the need to straddle a bucking bull, and if they ever did it may have been more a problem of loneliness on the prairie rather than a need to assert their machismo.

Then there’s the semi-feral horses specifically bred to buck – every little girl’s dream. We can argue that bucking annoying little men off their back could be fun, but after their carefree days of manhandling cowboys are over, what happens to them? And what happens to the hippie horses that are bred to buck, but maybe prefer chillin’ lakeside?

CTV News reported that about 20 horses a year bred at the Calgary Stampede ranch that aren’t angry enough to entertain spectators at the “greatest outdoor show on Earth,” or at lesser outdoor shows, are sent to slaughter.

After all, we can’t expect the people making the big bucks off these animals to support them after they are no longer profitable. That would just be silly.

But why spend the time and energy harping over the treatment of rodeo animals when billions of these same types of animals are so horribly abused in factory farms only to be killed and consumed to the detriment of the environment and our health? Isn’t it better that they get some years breathing outside of a factory farm than living their entire, pathetic lives within the confines of a feed lot?

This is a convenient guilt dismissal for those who have it in them to enjoy things like rodeos, or circuses. But the existence of unimaginable cruelty has never been an excuse for just a bit of cruelty. I might be less disgusted by rodeos if the animals doing the hard work retired to enjoy the fruits of their labor, but obviously, this is not the case.

Embracing and respecting tradition is not an all-or-nothing game. We take what was good and perpetuate it. We remember what was harmful, and work to learn from our mistakes.

The Aztecs of Mexico were remarkable astronomers, but they also had a tradition of sacrificing and eating their prisoners of war. Modern Aztec descendants can embrace the wisdom of their ancestors without committing the same cruelty upon their enemies.

We can celebrate the courageous, adventurous and enterprising spirit that many of our ancestors embodied as they set out to brave the unknown of the “wild west” without perpetuating the cruelty that may even have been a necessity at one time in the past.

Sex, booze and rock ’n roll – count me in. Animal abuse should be a thing of the past.