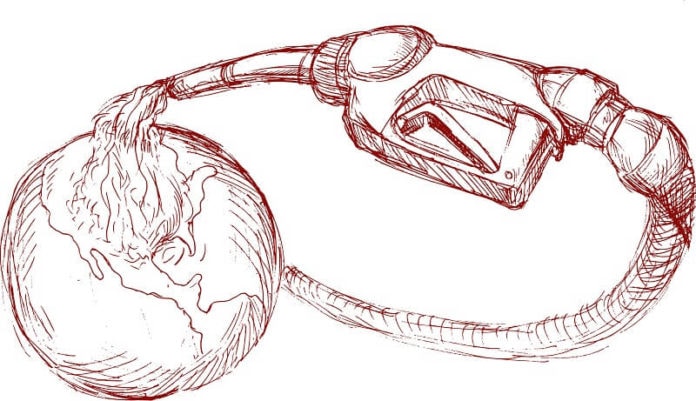 Is Drilling Holes in the Earth the Beginning of the End?

Oil and products made from oil are such a part of our everyday lives that it’s hard to imagine a world without it. But the first oil well was only drilled in 1858, and offshore drilling only started in 1896. Right from the start there have been concerns about the potential damage caused to the planet by drilling holes and extracting the oil, and these concerns have been brought to public attention in recent years by plans to start fracking for oil on a large scale here in the UK. But is there any basis to worries about drilling and removing oil from the earth?

Undermining the Structure of the Earth

The main worry many people have about drilling holes in the earth is that the whole structure of the planet will be undermined. Think of it like a piece of wooden furniture which is infested with woodworm; over time the holes will undermine the table so much that eventually it will crumble and fall apart. The main problem with this theory is that the earth does not have the same structure as a table, it’s more like a can of soup with a solid exterior and a liquid interior. Most of the oil present in the ground is not in large lakes waiting to be sucked out, it is in rocks. Once the oil is extracted the rocks remain, and the earth remains stable. Small levels of subsidence have been noticed where oil has been extracted near the surface, but this type of oil reserve has been exhausted and further subsidence is unlikely to be a problem.

Related:   Is There A Safer Way To Manage The Oil Industry?

Fracking, or hydrofracturing to give it its proper name, is a technique used to extract mainly shale gas but also oil from rocks deep inside the earth. This technique involve forcing water at high pressure into the rock which fractures it and releases the gas. It is a controversial gas production method because the fracking process is known to cause small earth tremors or earthquakes. These earthquakes are usually too weak to be felt by the general public, but there is a worry that many smaller tremors on a repeated basis could lead to more serious earthquakes in the future. As fracking is still a new technique, the scientific evidence about the long term consequences are still unknown.

The potential problems which may or not be caused by fracking are still in the future, but one issue which is affecting many British homes at present is subsidence caused by old mine workings. Some areas of the country – particularly Cornwall, Central Scotland, Nottinghamshire, the North East of England and South Wales – have been the location of mining activity for centuries. Many of these old mine workings are close to the surface compared with modern mines, and to further complicate matters, mines were not mapped as accurately in the past as they are now.

Searches for mine workings are a standard part of the service when you buy a property, and most mortgage lenders will insist that this is done. However, as many mines do not appear on maps, there is always the possibility that you buy a house and are unaware that there is a mine shaft underneath. Over time, the wooden props supporting the mine rot away and start to collapse, which causes the ground to shift and for large cracks to appear in your property. If you notice cracks, call in a Structural Engineer or Chartered Surveyor immediately to assess the damage, predict how bad things are going to be, and recommend a course of action.

In many cases, unpredicted subsidence will be covered under your buildings insurance, but it could take many months for a claim to be sorted out. There is also a special government fund to compensate homeowners affected by coal mining, and homeowners should investigate making a claim under the Coal Industry Act (1994). There are many different options for resolving problems with subsidence, including shoring up the house by reinforcing the foundations, pinning walls together to stop them moving any further apart, and putting long concrete pillars into the earth to support the entire house. This work is expensive and disruptive, and the longer it is left the worse the problem will be, so deal with any signs of subsidence promptly.

In summary, the problems with constantly drilling holes in the earth may not be in front of us tomorrow or even next week, but as with everything;  if you break it, you have to buy it – but at what cost?