Between oil spills, radiation leaks and collections of pollution you can see from space, humans have been responsible for some pretty awful environmental catastrophes. Sure, tornados and earthquakes take a toll, but man-made disasters have had a massive environmental cost, both in dollars as well as the well being of the planet.

The infographic below looks at some of the worst man-made environmental disasters, and roughly how much they cost the planet. 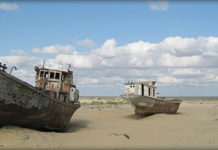