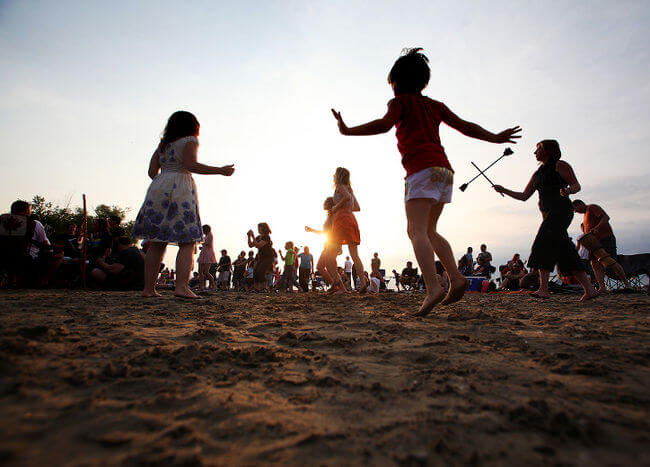 Not a moment too soon: Summer Solstice (the “official” first day of summer) is this Wednesday, June 20, 2012—despite how it feels in your neck of the woods.

Some of us are actually still buttoning up against autumn-like weather; while for others, scorching summer swelts started long before June. Still, the official recording of the time of the solstice is determined by the exact point the Sun reaches its farthest point in the skies north of the equator, and directly above the Tropic of Cancer. In June 2012 this is occurring on Wednesday the 20th at 7:08 p.m. EDT.

Solstice in the skies

For most of us, summer translates to hot, lazy days on patio furniture, bbqs and family trips where you lament the strength of the heat, but up in the sky above the Northern Hemisphere the sun is actually further from us than it is all year. On the June solstice the Earth and sun line up so that its rays shine down on us at a more direct angle than on any other day, causing temperature increases and the days to stretch. (Contrastingly in the winter—while the sun may be lower in the skies, its light comes in at a less direct angle and gives us “feeble winter sunlight.”)

“High Noon” on the solstice refers to when the sun lies directly above you at its highest point, shedding more straight sunlight goodness on you than at any other time of the year (assuming cloud coverage is thin to nil—cross your fingers Vancouver).

Visit www.almanac.com to find out precisely when the sun rises & falls in your time zone, and get yo’ Vitamin D on.

Solstice Recognition on the Ground

There are various solstice rituals, events and celebrations that take place around the world and within different groups to honour “Midsummer”.

For centuries and within a number of different civilizations, the period of June 21-24 has been a time of year that is acknowledged and celebrated as being significant on a religious, cultural, spiritual, and/or biological level.

“For many cultures, the solstice was a celebration of agriculture — acknowledgment of the sun’s role in growing crops. It also marked the passing of the sun, which had reached its peak for the year. Even today, to mark the solstice is to acknowledge that the days will get shorter now and winter is on the way. (Toronto Star)

Your local yoga studio is likely to offer 108 Sun Salutations.

“Solstice” is derived from two Latin words: “sol” meaning sun, and “sistere,” to cause to stand still.